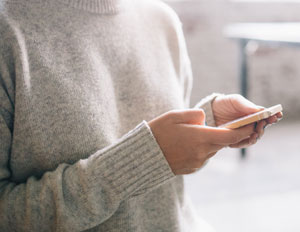 A brand new study asking U.S. teens and their parents about their social media and mobile app use revealed some intriguing insights, not only about teen’s attitudes about tech, but about how connected… er… disconnected parents really are from their kids tech communication. The study discovered:

Interestingly enough, 88% of parents say they are aware of all or most of the social networks or apps their teens engage with, but yet half of that number actually uses the top social media networks their kids are using (Snapchat and Instagram are two of the top five, yet only 49% and 45% of parents use them).

These numbers don’t surprise me at all. It was only a few summers ago that McAfee interviewed teens and parents about teen online behavior, and “the majority of parents (74%) simply admit defeat and claim that they do not have the time or energy to keep up with their children and hope for the best.”

So, how can parents interact with their kids about technology without being a helicopter parent?

Here are 3 tips to keeping connected with your kids… without become that creepy parent:

1. Start Connected
From the moment kids first get their tech, always be involved and connected with them. Yes, this is difficult for the parent of the 17-year-old who just began worrying about their teen’s tech use and finally has decided to do something about it (we devoted some time to this parent in our book, Should I Just Smash My Kid’s Phone?), but it’s easy when your 12-year-old is begging for a smartphone and you still hold all the cards. So, when your kids get to the age where they want their own tech, make sure you…

2. Sit in the Front Seat
Just let them know from the beginning that owning a smartphone or a tablet is a privilege… just like driving a car. When they learn to drive the family SUV, it’s going to be with Mom or Dad sitting right there in the front seat. In the same way, when they’re learning to make good tech decisions, let your kids know you’ll be sitting there right in the “front seat.”

This means parents should have the passwords on their kids’ devices. I’m not alone in this conclusion. In fact, in my post about Keeping Social Media Safe, you’ll see numerous examples how parents can and need to make a proactive effort to keep aware of their kids tech use, and walk alongside their kids teaching them how to make good entertainment media decisions. But this means…

Would you want to open up to your parents if they treated you like that?

Sadly, today’s kids are going elsewhere to talk about personal subjects. For many kids, that’s online. That same study above revealed that 40% of teens felt anonymity allowed them the freedom to talk about awkward topics. In fact, only 4% said they would have talked about the same topic if their identity were tied to it. This is scary. This means that many of today’s kids don’t have anyone “safe” enough to open up to, so they resort to, in essence, putting on a mask and talking to strangers. What is that teaching our kids? (More on anonymity here.)

What if parents became their kids “Go-to” person about tough topics? What if we avoided freaking out when our kids messed up or asked us surprising questions… so they realize, “This is something I can ask Mom about.”

61% of teens in the above study said it doesn’t matter whether parents follow them on social media. That means over half of teens don’t really care if Mom and Dad are following them on Instagram. And the other 39% probably just wish Mom and Dad would stop stalking…or just creepin’ in general.

My daughter Ashley gave us a picture of what this might look like a little while ago in her post, Ashley’s Rules for Parents. The funny thing is, Ashley just left for college a couple weeks ago, and the two of us use Snapchat all the time to communicate with each other. For the last few years I participated in my daughter’s social media activities… I didn’t probe.

I think Common Sense Media gave us a pretty good picture of what this looks like in this article, sharing how parents can play games with their kids, post pictures with them and talk about online experiences.

In a world where over 80% of 12-17-year-olds own smartphones, parents need to establish a digital connection with their kids.

JONATHAN McKEE is the author of, More Than Just the Talk, and over a dozen other books. Take a peek at his Amazon author page HERE.