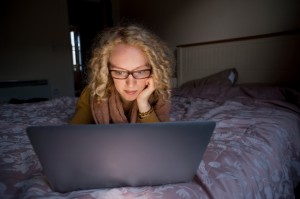 (and 5 Ideas to “Socialize”
the Socially Isolated)

In a world where 4 out of 5 teenagers are social media users, you’d think young people would be growing more… social?

In fact, most research is revealing quite the opposite. The reality is, the more time a young person spends dialoguing with people through screens, the fewer close friends they have, and the more difficult it becomes for them to actually communicate with people face to face.

Let’s break that down, and then I’ll provide 5 ideas to help you “socialize” a generation who have socially isolated themselves.

Many of you recall me discussing this growing phenomena in my book Connect: Real Relationships in a World of Isolation, highlighting an intriguing study where doctors compared face-to-face dialogue to communication through screens. In this study, researchers observed the effectiveness of doctors using computers to collect data from teenagers because “young people will type more on a screen than they will share face-to-face.” Doctors surveyed teenagers about subjects such as self-injury or feelings of depression. In face-to-face interviews, 52 percent of the students responded. That number went up to 69 percent when students could use a computer to respond.

“A teenager who is sad and maybe even considering suicide may be reluctant to tell a doctor about life-threatening troubles. But the same teenager is far more likely to tell a computer a secret that he or she would be hesitant to share with even a close friend, much less a clinician who may be a friend of the family.” (ABC News)

Maybe that’s why so many young people are now seeking anonymity online. Regardless, it’s becoming more and more difficult for young people to communicate the old fashioned way.

Maybe that’s why they have fewer friends than we did when we were their age.

Yes, you read that correctly: students who are seeking friends through screens end up with less close friends.

This doesn’t surprise me.

I’ve written about this seismic shift from “Community” to “Individualism” before, citing two studies, both reporting the average American losing one third of their “close confidants” … or one close friend. In short: people have less close friends today.

One of these reports revealed:

What does this look like in real life? My neighbor’s husband died three weeks ago. We have 12 houses in our cul-de-sac. We were the only family to visit her, bring her flowers and offer our assistance. Honestly, I think only two other neighbors on our street even know her name.

Perhaps adults shouldn’t cast stones at teenagers, blaming them for isolating themselves with their phones… because apparently our kids are learning these skills from us! Researchers from Boston Medical Centre would argue parents are setting precedent with their own phone habits, using their phone continuously during meals and ignoring their kids.

Maybe we all need to be careful of isolating ourselves, staring at screens.

So what can we do to correct this problem?

5 IDEAS TO “SOCIALIZE” THE SOCIALLY ISOLATED

So why are you still staring at this screen?

Go outside and teach your kid how to toss a Frisbee! 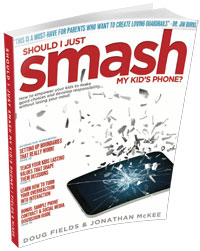 JONATHAN PROVIDES EVEN MORE
HELPFUL ADVICE IN HIS BOOK,
SHOULD I SMASH MY KID’S PHONE?