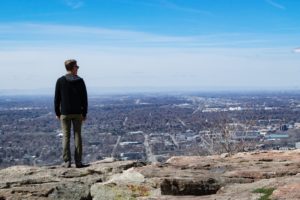 Some of you might have caught the exclusive excerpt of my new book I posted on our parents site last week. The following is ANOTHER excerpt from the first chapter of my brand new book, The Bullying Breakthrough, releasing this month…  the first book where I finally tell my story…

Chapter 1: View from the Edge

“Sticks and stone may break my bones, but words will never hurt me.”

We’ve all heard it. We all had teachers who reiterated it. “…word will never hurt me.”

Nothing could be further from the truth. I probably don’t even need to give you thirteen reasons why.

Anyone who has been mocked or victimized will tell you nothing is more crushing or more demoralizing. Speaking completely candidly, I’d rather get beaten senseless than become the victim of public humiliation—and sadly, I’ve been there.

That’s the intriguing thing about bullying. I’ve read countless articles and studies, heard theories from known psychologists. I’ve attended assemblies and conferences about bullying. . . almost always by someone who hasn’t been bullied.

I grew up five minutes from the American River Parkway, a beautiful recreation area where the American River glides 120 miles from the Sierra Nevada Mountains down to the Sacramento River. One of the trails we took as kids would bring us to the edge of a cliff 120 feet high overlooking the north side of the river. Sacramento residents call it “The Bluffs.” A romantic lookout for many, but for me, a location where I would contemplate taking my own life.

When I was sixteen years old I stood at the edge of that cliff staring down at the rocks below.

I can’t tell you what was unique about this particular day. I honestly had experienced hundreds of days like this, especially years prior in middle school, being mocked, pushed around, and demoralized while my classmates looked on with laughter or passive approval.

I don’t blame them. You had only three choices: laugh, ignore, or say something. Those who spoke up would only be next. . .so everyone chose either laughter or silence. Literally everyone.

No one every spoke up.

I probably couldn’t have put words to what I was feeling standing on that ledge: loneliness, hurt. . .a longing for someone who understood? Most of the people in my life didn’t even know what went on at my school every day. It’s not their fault; I never really shared the experiences. If I did, I most likely wouldn’t have even used the word bullying, because in my mind bullying was a big kid cornering a little kid and stealing his lunch money. My aggressors weren’t big kids. They weren’t even all male. My aggressors came in all shapes and sizes. But what I was experiencing was actually textbook bullying.

The Centers for Disease Control and Prevention defines bullying as“any unwanted aggressive behavior(s) by another youth or group of youths who are not siblings or current dating partners that involves an observed or perceived power imbalance and is repeated multiple times or is highly likely to be repeated.”

“Perceived power imbalance”—a good word choice. Kids don’t have a positive concept of “self,” so they try to make themselves feel better by hurling verbal onslaughts at others. That’s an accurate description of what my peers did to me each day. I was an easy target, so I became a stepping-stone others used to raise themselves up so they could feel more powerful.

“Repeated multiple times”—also accurate. For me it was daily in middle school, at least weekly in high school. Certain environments seemed to foster it more than others, none more so than PE class.

That particular day began with gym class, physical education, or PE as our school called it. PE is a cruel requirement for nonathletes, something the physically fit will never understand. PE is where the weak get intimidated by the strong. PE is where small boys get hung by their underwear or slapped in the back of the legs while bystanders laugh hysterically.

That morning in PE a popular kid had said something cruel. I don’t remember the exact exchange, but knowing me, I probably retaliated with a quick verbal jab. I had developed a quick wit over the years. I had plenty of experience defending myself.

But this kid wasn’t going to tolerate any banter. He hit me hard in the jaw. I can still hear the cackles from the crowd and feel the stares of those who quickly circled around. Funny, I don’t recall the physical pain of the hit.

More words were exchanged. I had two choices: fight or back down. I chose back down.

Names were called—cruel names that are difficult even to put into print.

I was neither, but it didn’t matter.

Threats were made. “You’d better watch your back!”

He meant it. And he was right. This altercation had triggered a social seismic shift, and there were aftershocks. You see, once someone is publicly humiliated, the victim bears an invisible Kick Me sign on his back.For the rest of the day I endured shoves, jeers, and cruel whispers from kids I had never even met. Other kids with low self-esteem jumped on the opportunity to step up a notch on the social ladder by lowering someone else a rung.

I don’t know why this particular day pushed me over the tipping point, since I had experienced many other days like it. Regardless, six hours after the original jab, I stood at the edge of the cliff looking down at the rocks.

I wanted to jump. I really wanted to, honestly, for selfish reasons.

They’ll regret everything they ever said!

Author Josh McDowell calls The Bullying Breakthrough “Jonathan’s most vulnerable and insightful book yet! An eye-opening peek into the world of bullying today and what we can actually do to prevent it.”

Social researcher Shaunti Feldhahn claims this is “Jonathan’s most important book so far,” describing it as “an essential guide to preventing and stopping bullying behaviors.”

The Bullying Breakthrough is available for PRE-ORDER on Amazon right now and will be releasing this month! Order your copy now!

2 Replies to “View from the Edge”