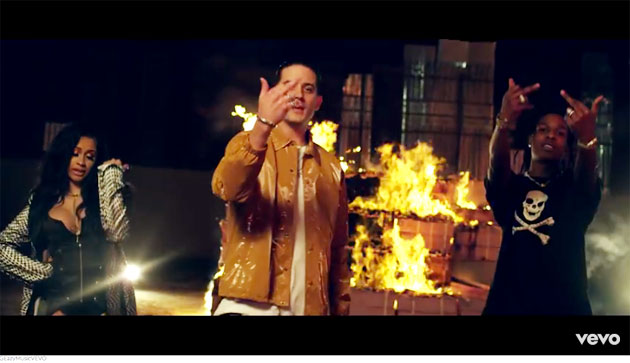 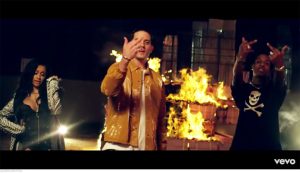 The song has been on the top of the charts for 20 weeks now peeking at No. 4, currently at No. 10. It’s called “No Limits”… and it truly lives up to the title. A song where the chorus simply repeats, “Ayy, yeah, f**k with me and get some money.”

The man behind the lyrics explains to Genius.com the chorus means he’s a cash cow. He’s so popular everything he touches turns to money. Sadly, I’m not sure he realizes quite how ironic his chorus is.

Allow me to explain…

This delightful little diddy is from hip-hop artists G-Easy, A$AP Rocky & Cardi B, all bragging about how great they are and providing details about their sexual escapades. Like G-Easy when he raps:

It’s been three days in a row, your bi**h coming over
Told that bi**h to kick rocks, she act like it’s a boulder, ayy

G-Easy claims that was based on a true story. “I was messing with this girl and I could not get rid of her. Literally for like three days and that was kind of around the time I wrote the song.”

Anyone else find it a little surprising in today’s climate that multiple songs like this in the top of the charts are admitting to treating women like this? (Like what Post Malone and 21 Savage brag about in their chartcrusher, “Rockstar.”)

But it’s not just guys who are spouting sexually aggressive lyrics in “No Limits,” female rapper Cardi B chimes in with her own libidinous tales, including multiple euphemisms for oral sex… lyrics I’ll let you look up yourself… nothing new for the top female artist right now who has… count em’… 5 songs in the top of the charts (more about her life, music, philosophy and faith here).

But then G-Easy brags about something a little awkward just months after the CDC announced STDs at an all time high… for the second year in a row! His words:

I can pull a million girls from a mic stand
Pull one at my show ’cause I like fans
Later on, I got two in my night plans
Man, this year, I had three hundred one night stands
Keep a Costco pack of rubbers in my nightstand

Perhaps G-Easy’s physician should warn him by showing him some simple math. Let’s start with his chance of getting one of these “one night stands” pregnant, or to put it in a language he might listen to, “paying child support!” If G-Easy were to simply flip over that condom box on the nightstand he would read that condoms are 98 percent effective against pregnancy. So statistically, if Mr. “G” is sleeping with 300 different girls annually, then he will get 6 girls pregnant each year.

That’s a lot of child support!

I don’t think that was his intention when they sang the chorus, “f**k with me and get some money,” but it’s rather ironic.

Perhaps he should also consider his future medical bills. If G were to spend even 10 minutes familiarizing himself with STDs, he’d realize he’s in for some really bad news. If he simply whips out his smartphone and pulls up the CDC’s web page about STD prevention, even if he ignores their advice that “the most reliable way to avoid infection is abstinence,” followed by “reducing the number of sex partners” (whoops, whoops), then he might click over to the STD Fact Sheet page where he can find helpful information on the STDs that are plaguing this country. For example, the most common STD the human papillomavirus (HPV). The first sentence on the HPV and Men fact sheet reads…

Nearly all sexually active people will get human papillomavirus (HPV) at some time in their life if they don’t get the HPV vaccine.

Wow! “Nearly all.” How’s that for a percentage. But what if G gets the HPV vaccine and wears a condom every time? Maybe he should click on the CDC’s condom effectiveness page. The first line spells it out pretty clear:

Consistent and correct use of male latex condoms can reduce (though not eliminate) the risk of STD transmission.

If G keeps reading he’ll read that even though condoms are extremely effective at reducing risk against STDs transmitted by genital secretions, they are less effective at reducing the risk against STDs that are passed through skin-to-skin contact (like HPV and Herpes). In the best scenarios, with consistent condom use, condoms prove to be “up to 70 percent effective” against HPV.

But his worries don’t stop at HPV. If he keeps reading that CDC Condom Effectiveness page he’ll find:

“Limited protection” is pretty scary in a world where “syphilis rates increased by nearly 18 percent overall” in the last year, according to the most recent CDC press release in September 2017.

Sounds like G better be ready for some hefty medical bills, not to mention the repercussions if he gets a virus like Herpes… because that never goes away. And sadly, that’s just one of many he could carry.

I’m all for freedom of speech, but couldn’t we just add a responsibility clause that requires someone who provides so much misinformation to follow it up with accurate information? Like maybe… the rest of the story?

Like if his sexual escapades lead to one of these STDs, in all fairness he should release a song titled, “Whoops, my junk just fell off,” or, “Why does it have to sting every time I pee?”

In reality, G-Easy better hope his bragging is pure hyperbole. If not he’s heading for a world of hurt. The hurt is only going to be magnified when he discovers “no limits” is a myth. Many before him have discovered that the hard way. Let’s all pray that maybe G and the others learn before then, and in the meantime… maybe he should stop singing about it to kids whose parents have no limits with what their kids access on their devices.

5 Replies to “The math behind 300 one night stands”