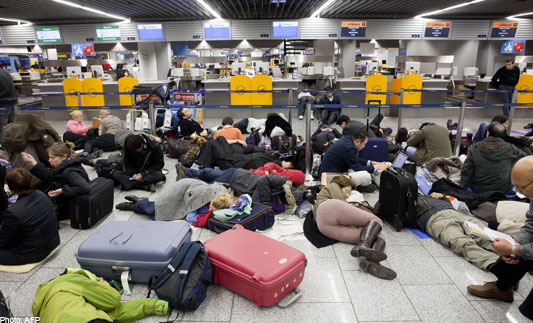 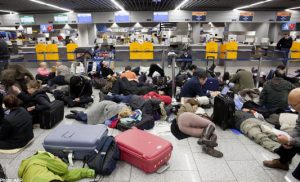 This year I flew over 100,000 miles, mostly domestic. That means a lot of security lines, boarding groups, layovers… and bad airport food. It also means learning a few tricks of the trade actually getting from A to B (while many others were stuck in A for days at a time).

I’ve been doing this for two decades now, and in those years I’ve learned a lot of travel lessons the hard way. I’ve also observed a lot of people missing flights and having their vacations completely ruined for one simple reason…

That’s not an insult… I mean it in the true sense of the word. They just didn’t know better because no one had ever told them vital information… like if you are not a frequent traveler and you show up to the Orlando airport 70 minutes before your flight the week of Thanksgiving… you are definitely going to miss your flight. Period. (I just saw it… it was sad. Lines were longer than they predicted, they didn’t make it, and to make matters worse they were delayed two days because flights were so packed. And I guarantee the seats they finally got were separate in the back of the plane.)

I see it all the time. I’m not exaggerating. I see people miss flights, miss layovers, get stuck in cities they don’t want to be in, and lose days of their vacations. Often, they lose a day or two of “paid” lodging at their final destination because they tried to save a few bucks booking bad flight itineraries that were destined for failure.

So here are a few tips that you might want to consider for your holiday travels or when booking your next vacation. These tips will save you time, money and a lot of frustration:

Sign up for Pre-Check
This is by far the best time saver you’ll encounter, and worth it if you plan on traveling even twice in one year. Pre-check is becoming a TSA trusted traveler, which means not taking off your shoes, belt, underwear, etc. in the security line, and even more importantly, it means shorter lines! I frequently arrive at airports where the normal security line is 20 to 30 minutes, and pre-check is less than 5. Find out more about Pre-check here on TSA’s website. Well worth the less than $100.

Take the first flight out of the day
I know, I know… you value your sleep. But do you value actually getting to you location? Because if you take the 2PM flight instead of the 6AM flight, 12 flights had to go perfectly for the 2PM flight to actually make it. You logarithmicly lessen your chance of arrival the later in the day you travel. Suck it up. Set your alarm. You can sleep when you actually arrive at your location (as opposed to sleeping in the airports next to all those people who booked the 2pm flight).

Never check your bags if you have a layover
My wife Lori loves checking her bags, but she’s finally learned why we don’t check our bags whenever possible. Whenever there is a flight delay, cancelation or mixup at your layover, you’re stuck! It’s like this: you arrive at Denver, Dallas or Atlanta for your layover, and your flight to DC is delayed six hours, and possibly stranding you overnight. But there is another flight to DC, to Reagan, or Baltimore (all a short drive away) with seats open! So you walk up to the gate and ask if you can switch onto that flight instead. Do you know what the first question they’ll ask you is? “Did you check your luggage?” If the answer is “yes”… then you’re out of luck (apparently terrorists check their luggage). Carry your own luggage and it opens up your travel options. Not to mention, when you carry your own luggage… they can’t lose it!

Check-in Online
How about standing in one line instead of two lines at the airport? Sound good? Well, when you don’t check your bags, and if you check-in online, you save yourself an entire line at the airport. Go straight to security. Never stand in a line you don’t have to.

Arrive 90 minutes early, 2 hours early during the holidays
I have countless friends who love to try to time it perfectly, arriving at the airport in perfect time to hit a short security line and go straight to the gate. This works some of the time… maybe even the majority of the time. But it only takes one closed freeway exit, one flat tire, one late parking shuttle bus, one slow security line, one holiday rush (I’ve literally experienced every one of these at least once in the last 30 days) for your vacation to be ruined. And for what? 20 minutes extra sleep? I am not exaggerating when I say almost every time I’m in the airport I encounter multiple stressed out people in line who are surprised how long it is taking… because they didn’t plan enough time. Who cares if you sit and read your book in an airport seat for 20 extra minutes… it’s better than missing the first two days of your vacation (and I promise you, it happens all the time).

No Layovers Whenever Possible (and never more than one layover)
Traveling to Milwaukee on United Airlines? You’re going to have to layover in Chicago. So you’ll land in Chicago, wait for about an hour (if no delays), then get on a small plane (which is the first to get cancelled during weather), and then take an hour flight (really about a 10 minute flight, but with taxiing the runways, etc, it takes an hour). These flights are cancelled and delayed all the time. Why not stop in Chicago, get a rental car and drive the one hour and 16 minutes to Milwaukee. You’ll beat the people who took the plane, you’ll double your chances of actually getting there, and you can stop at Giordano’s Pizza in Gurnee on the way up to Milwaukee and eat some of the best pizza in the world! Always avoid layovers whenever possible. If I can get within a couple hours of a city, I’ll drive every time (while others sit in airports pulling their hair cursing their delayed flights).

Avoid anything smaller than a 737 whenever possible
For the reason I just mentioned above… the small planes are the first flights to be cancelled during the weather delays. Don’t ask me why, but air traffic control will cancel the small planes first. So if a plane has less than three seats on each side of the aisle, book a bigger plane.

Stick with one airline
I’ve met countless people stuck in airports who use Expedia or Orbitz to book cheap flights on the cheapest airline. Problem is, you never accrue street cred with an airline, and then you’re the last person in line. It’s like this: the more you fly with one airline, but more status you have. The more status, the better place in line (which means getting that overhead bin space), the better chance of getting on that waitlist when your other flight cancelled. Ask my daughter when she got stranded in Dallas for two days because she was with a group who booked the cheapest airline. People with status got out that night. She had to wait two days to get home.

Fly Southwest Airlines
Okay… this one might sound biased (and no, I’m not getting paid for an endorsement), but if you really want to get where you’re going, fly Southwest Airlines. They will up your chances of actually arriving at your final destination. The reason is simple: work ethic, and a shrewd business model. Notice I’m not even mentioning the fact that the flight crews are actually happy with their job and treat you better, or the fact that this airline somehow made a profit the tough years when almost every other airline didn’t! The important thing for you to know is that this airline flies one type of plane and their crews can be interchanged at anytime, so whenever there is a problem, maintenance is quicker, a new pilot or flight crew can be switched, while the other airlines are stuck waiting for the right people or the right part for that particular plane. In addition, if a Southwest flight is late, you’ll see a pilot and stewardess walking through the aisle actually picking up trash, while the other airlines wait for the designated garbage people (because their union doesn’t allow them to touch trash). Fly Southwest once and you’ll see if for yourself. Oh… and if you make a mistake and need to switch your flight… they don’t charge you a change fee. These guys are just amazing.

Smile
As much as I just needed a tenth tip for the list, it’s amazing what a smile will get you from that person at the gate. Treat people right and they’ll treat you way better.

That’s it! Follow these tips and you’ll actually arrive at your Hawaii resort (or your mother in law’s house in Cleveland).