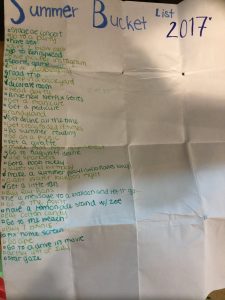 These are just some of the items on a young person’s “bucket list” gone viral on Twitter.

Does this surprise me?

The timing is intriguing. Just last week I had a 3+ hour drive to the airport on my way back from teaching youth workers at a convention in Indiana. I took the opportunity to listen to the current Billboard Hot 100 to get a glimpse into the top music today… and apparently teen thinking today.

The most predominant music genre was definitely rap and hip hop, all five of the top five had sexual references, two actually referred to the female genitalia, and the top message in most of the top 100 was predominantly “live for the moment.” But I think the biggest factor that hit me was that most of this music (and most of entertainment media in fact) didn’t reveal any specific consequences.

Isn’t it also bizarre that one of the TV shows that actually does reveal consequences of behaviors went viral in the last year.

It’s funny. This generation likes innocent fun… like baking cakes and cookies. This young YouTube star has over 8 million followers… and she just bakes creative yummies. Sadly, the aforementioned bucket list only has a few items that might even fall in that category: