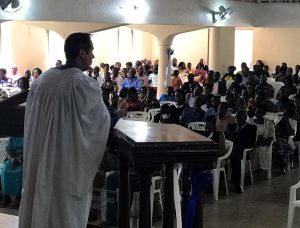 I’m as type-A as you get. My wife says I’m borderline OCD. I don’t go on a picnic without exhaustive preparation and planning. That’s why Africa is always a stretch for me. Africa is on the complete opposite end of the spectrum.

They call it Africa Time.

This is my fourth time to Africa, third time to Uganda, and I’m pretty used to it. I try to have lots of resources and training available to help people out last minute… that’s the way lots of things happen in Africa. Last minute.

“Wanna speak to our group?”

I’m cool with that. But this trip stretched me even more last Sunday. I knew I was going to preach at a large Anglican church in the city of Kampala Sunday afternoon, but there was also a chance I might speak somewhere Sunday morning. As of Saturday, no word. Finally Saturday afternoon my friend Rev J said, “I just found out you will be speaking in three morning services at another Anglican church in our city tomorrow. The pastor would like to meet you.”

I met the pastor about an hour later, moments before I began teaching a group of youth leaders. He handed me a piece of paper. “Here are the times of the services, and here’s the passage we’d like you to preach on.” Luke 16:1-14 was written on the paper.

I quickly looked up the passage. It’s the story of the shrewd manager. Also knows as the story of the dishonest manager—the manager who was about to get fired so he went around and cut everybody’s debt in half and then his boss surprisingly says, “Good job!”

I looked at the pastor and honestly said, “Well, I teach most of today and I’ll only have a few hours tonight to prepare. So are you sure you want me to preach on this… or would you rather I preach on something I’ve already prepared for?”

He immediately said, “Please preach on this.”

These are the moments God stretches us, right?

Sermon prep time varies from pastor to pastor. I’ve met some who might only spend 5 to 10 hours on a talk. Most the ones I really enjoy spend upwards toward 20.

I had just a few hours that night… to tackle one of the most debated, and dare I say misinterpreted passages in scripture. (Can I cheat on my taxes and use the proceeds for the Kingdom?)

The next morning they adorned me with a robe (isn’t that what you do with robes… or did they just dress me with it?), and after about an hour and twenty minutes of worship, readings, announcements, and more worship… it was time.

The Dishonest Manager
It’s an intriguing passage. At first glance I thought it was about money, but that’s just a part of it.

Jesus uses shock value like he does in so many of his stories. Remember The Good Samaritan? In that story he was talking to a racist religious snob and he made the hero of the story the very race this man despised. It would be like telling a story at a Trump rally and making Hilary the hero.

Jesus’ parables are all about the punch and the people who he’s speaking to.

In Luke 16 he’s talking to the Pharisees—also religious snobs. In the chapter prior he just finished telling three stories about how God values the lost, and in the final story (the prodigal son) he even made the protagonist a guy who completely abandoned God and partied his life away. Of course this guy repented and had a party thrown in his celebration while the guy who was good all of his life watched with contempt. (Are we seeing a pattern in these stories?)

So in my passage, Luke 16, the parable of the shrewd manager, once again we have a protagonist who is very flawed. In fact he’s been sitting on his butt doing nothing to the point that his boss calls him in and fires him for wasting his time and resources.

Here’s where the story gets interesting.

When called to account, the guy gets off his butt and begins working furiously, using every means possible (even dishonest means) to build report with the people around him. He’s like Jerry McGuire on the phone frantically trying to salvage clients for the future.

When the boss sees this, he commends the dishonest manager. It’s as if he basically says, “Why didn’t you work this hard before?”

And Jesus even explains this to make sure his audience doesn’t misunderstand. Here’s one of the key verses:

“I tell you, use worldly wealth to gain friends for yourselves, so that when it is gone, you will be welcomed into eternal dwellings.”

How’s that for a message. Use your money to show love to other people so they’ll want to join you for eternity.

This passage isn’t telling us to be dishonest. Far from it. The manager in this story is praised for two reasons.

Here’s a guy who was doing nothing but spending on the now. Once he realized he was shrinking his possibilities and hurting his potential, he transformed his behavior and began building relationships for the future.

What are you investing your time, energy, efforts and resources in?

Are you investing in the now or in eternity?

Who are you in this story? Are you the guy sitting on his butt with no thoughts toward the future? Are you the religious snobs who heard this story and didn’t change a thing? Or are you the guy who realized, “Uh oh, there is more to this life than present pleasures, I better start living for eternity.”

Pastor David Guzik (whose helpful commentaries are available free in BlueLetterBible.org) says it well. “If we pursued the Kingdom of God with the same vigor and zeal that the children of this world pursue profits and pleasure, we would live in an entirely different world.”

This story simply illustrates Jesus earlier words, “Where you treasure is, your heart is.” This time he expands on it. Closing the story saying, “You can’t serve both God and money.” In other words, choose one.

What are you investing in?

Are you spending your money on the now or the not yet?

How much energy, effort, and yes… money… are you putting towards winning people for the Kingdom?

Maybe it’s time to have the neighbors over for dinner.