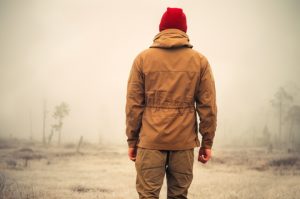 This week as I read about Jesus’ final hours, I can’t help but notice how often He went alone for some time of solitude to pray.

Men hate getting alone to just be quiet!

I think you’ll be surprised to discover exactly how much they hate it.

I’m co-writing a book right now with my friend Curt Steinhorst about capturing attention in a world full of distractions, and we devote an entire chapter to finding solitude, turning off the noise and actually allowing ourselves to process.

Men don’t do this naturally.

One of the most fascinating bits of research on this was from Tim Wilson out of the University of Virginia. Wilson noticed this difficulty people had just stopping and thinking so he decided to “test” to what degree people resisted times of solitude.

In the first rounds of the study, people struggled to last anywhere from just 6 to 15 minutes. They would cheat and habitually pull out a device. (Sounds like a bunch of teenagers.)

People were so set, in fact, on settling for a distraction, that Wilson decided to give them an uncomfortable one, just to see how badly they needed it.

He gave them ability to give themselves an electric shock.

The shock wasn’t anything harmful. Just a little buzz from a 9-volt battery. He even let them test it, to kill curiosity.

Then he began the next round of tests.

Only one forth of women shocked themselves. (Women are distracted… but they aren’t stupid.)

How bad do we hate solitude?

This week is a natural week to slow down, disconnect from the noise and connect to the one source that gives life, remembering the sacrifice He paid.

What does this look like in your world this week?

What do you have to turn off?