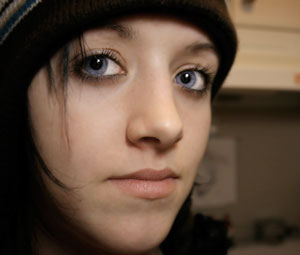 What do you think of when you hear the word “Christian”?

How do think most college kids would answer if you asked them that question on a University campus?

A couple weeks ago Chance the Rapper burst into Christian worship at the Grammys… and people didn’t know exactly how to respond. It honestly seemed out of place to see Christ glorified in a setting where He is typically ignored… even shunned.

If you watch any TV these days, it’s rare to see faith or religion thrown into the mix. Sadly, if it is, it’s often in gest, particularly portraying Christians as hypocritical or judgmental. If TV was the mirror of our society, then the majority of our population would probably be atheist, agnostic or “nones”, as Pew Research would call them. They either don’t believe in God at all, don’t know, or don’t identify with anything at all in particular.

But is that the case?

The good news is that only 22.8% of the US population would actually call themselves Atheist, Agnostic, or Nothing in particular. 35% of Millennials.

The bad news is that that percentage has grown almost 7-9% in the last 7 years alone.

Here’s the most recent breakdown of faith in the US from Pew Research: 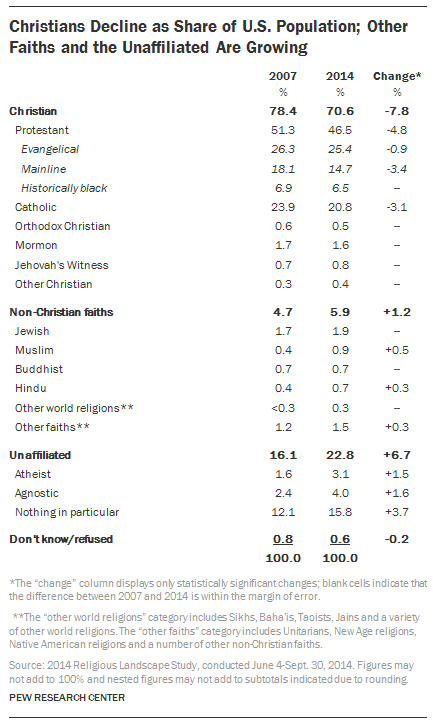 Sure, some might find comfort in the fact that only 3% of the population is an actual “atheist”. But when you add in 4% of agnostics and almost 16% of “nones,” that number creeps up to almost 23%.

Scarier yet is that 35% of Millennials fall in this category. “I don’t believe in anything.”

See that breakdown from each generation here: 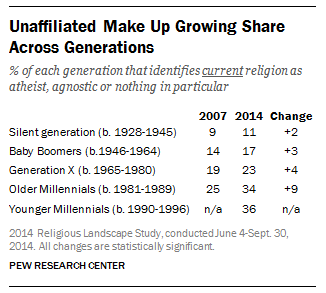 Of the remaining 65% of Millennials, only about 70% claim to be “Christian” (which by the way, according to Pew, includes about 3 percent Mormon, JW, and “other,” and we also know that just because someone’s Grandma told them they were “Christian,” it doesn’t necessarily represent their true belief. The point is… the number of those who even see Christianity as valid is plummeting).

In short, Christianity is shrinking in America, and believing nothing is on the rise (which the 2016 word of the year confirms).

I know, I know. You’re saying, “Jonathan, this is one of the most depressing blog posts you’ve written!” (I don’t know. I can think of a few others.)

Here’s the positive. If you’re reading this, it’s probably because you care about this generation of young people and you want to make a difference. You are not alone.

Don’t be discouraged. Don’t know you know that your work for the Lord isn’t in vain? (I Corinthians 15:58). Just last week I came across this testimony of a Christian Millennial who found her faith in NYC (Tim Keller’s church) published in an online periodical that doesn’t typically talk about faith in a positive light. These stories are out there. Churches like these are truly making disciples by teaching truth in a world that readily embraces lies.

Remind yourself that Jesus probably saw far more depressing numbers that this? When Jesus was standing looking over the “crowds”… he recognized people were lost. “Harassed and helpless, like sheep without a shepherd,” his exact words. And his response was, “So pray to the Lord who is in charge of the harvest; ask him to send more workers into his fields.” (Matthew 9:36-38)

Are you doing that? Are you going to your knees in prayer first? Are you praying for more workers?

If you’re a believer you know the end of the story. Keep sharing that story. Be a beacon of love and truth in a world so full of selfishness and lies.

This morning I’m praying for all of you!

Keep up the good work!

4 Replies to “The rise of the non-believing Millennial”