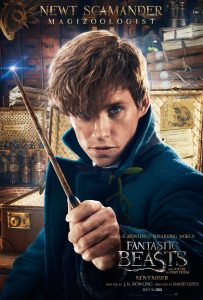 Lori and I went to see the movie Fantastic Beasts and Where to Find Them over Christmas break, a fun movie introducing great characters… but it left a bitter taste in our mouths.

As you know, Fantastic Beasts is yet another fantasy adventure story written by JK Rowling, and a prequel of the Harry Potter Series. Like the Harry Potter films, it’s well written with creative dialogue and likable characters… and also plenty of magic, wands, spells, and incantations.

On the positive side, it was a really fun film with a noticeable battle between good and evil. But at times I really struggled to enjoy it, because I was struggling with… there’s no better way to say it… the beguiling comfort with witchcraft.

Don’t worry… I’m not turning into someone crying “Satan” with the rationality of Chicken Little. We’ve all seen examples of people who glean more reading between the lines than was ever in the text. I don’t think JK Rowling is the antichrist. I don’t think Christians who read “Harry Potter” books will lose their salvation, and I confess I have even chuckled at some sarcastic pokes at that reaction.

And honestly, I love The Chronicles of Narnia, The Lord of the Rings… and The Wizard of Oz… all films/stories with good and bad witches, wizards or sorcery. And I have no problem with any of those stories, so it would be a little hypocritical of me to misquote a Deuteronomy verse and say, “JK Rowling is of the Devil because she writes about witchcraft.”

So why did the hairs on the back of my neck raise a little with Fantastic Beasts?

Here’s my concern. I saw the film, the entire film, not just the preview. And I noticed a few concerning elements:

First, it’s hard to ignore the subtle tone that witchcraft is this normal fun practice and (here’s the kicker) anyone who is against witchcraft is an intolerant, evil, prejudicial person. In fact, the film depicts a group known as the New Salem Philanthropic Society, with a child-beating leader and mindless followers who sing nursery rhymes about witches burning and dying.

The message was clear. You either are cool with witchcraft, or you’re Westboro Baptist.

Now I’m an educated adult, and I noticed some of these nuances. But will our kids?

The befuddling interpretation of good and evil wasn’t the only element that bothered me. The film also introduced an organization of the “good” witches known as the Magical Congress of the United States of America (MACUSA) who are keeping their eyes out for bad elements that threaten witchcraft in America.

Their gathering place or “court” has a large pentagram in the middle of the floor. Yes, I know the pentagram has meant many things throughout history. During the Renaissance, a man by the name of Agrippa popularized the belief that it was a symbol of magic. But ever since the early 1900s (1897 to be exact), the inverted pentagram has been the copyrighted logo of the Church of Satan. That, of course, is when the two points are pointing up. Some could argue that in this MACUSA courtroom, the one point is aimed at the leader. I’ll let you decide.

Again, I’m not Dana Carvey’s “church lady” screaming “Satan!” or circling subtle Illuminati images in every Beyonce video. But I always tend to notice a bunch of witches standing around a pentagram.

Funny, when I’m reading the Narnia series, or watching The Lord of the Rings, I never get the feeling that magic is being propagated as something to pursue. I can’t say I haven’t felt that with Rowling’s writings.

No, I’m not calling you out to ban this film; I’m not even saying its evil. I’m just voicing the fact that our world is not only very comfortable messing with the occult, it also conveniently produces art frequently confusing good and evil. I’m more than a little concerned we’re raising a generation saturated in these subtleties every day.

Have you seen the movie?

What was your take?