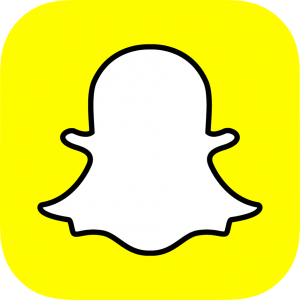 Remember the good ol’ days when our biggest concern was the 3,000+ texts our daughters averaged per month?

Sure, young people still text, but with 84% of 12-17-year-old mobile subscribers having smartphones this year… apps are the new gateways of communication.

So what is the favorite communication app used by young people today?

Snapchat, “by a landslide.”

“Snapchat because it’s pretty much just texting, but with pictures of my beautiful face” — a 16-year-old

Snapchat probably needs no introduction. It’s the extremely popular app that allows kids to take a picture or video, type about 40 characters, and then send it to whoever they choose…. but then the content disappears between 1 to 10 seconds after being viewed.

Kind of. (More on that in a minute)

Snap is going gangbusters. They even expect to launch Snap glasses, called Spectacles, later this year. It’s a fun way to communicate. Young people love sending Snap’s quick pics to each other with its creative coloring options and it’s cool filters. That’s probably why it’s become one of teens and tweens favorite communication tools.

Yes, it’s kind of confusing when people talk about teens’ “favorite” apps. You’ll read one article talking about how kids favorite “brand” is YouTube (no doubt, a very popular site among young people), then you’ll read countless others (Statista, AdWeek, Pew…) citing Facebook and Instagram as the social media site most teens have, with Snap coming in third. Just bare in mind, some of those studies are now a year old, which we all know, in tech years is like a zillion years old! And some of those studies aren’t asking, “What app do young people actually USE when they want to talk with their friends throughout the day?”

This is where Snap rules the roost. 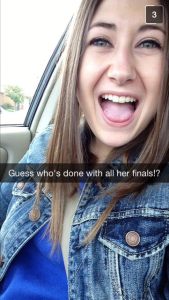 My own daughters and their friends (now 19 and 21) use it constantly. That’s why Lori and I have it. We can keep up with what our girls are doing day to day (they are in college 500 miles away).

“So much homework!” – sent with a picture of their laptop open next to a stack of books.

“Morning coffee run!” – sent with a picture of their favorite Starbucks mug.

“Jealous!!!” – sent with a selfie, with jaw dropped, in response to Mom’s snap of the piece of cake she was eating.

Snapchat isn’t that perfect photo that users spend 7 minutes doctoring to look better than reality. It’s a tool people use to show their friends what they are doing or feeling at that very moment, with an image that won’t be posted on a wall somewhere forever. It’s a “less demanding way to share than Facebook or Instagram.”

But it’s that very perception that pics are “ephemeral” or “temporary” that had most experts concerned about the app on the onset, myself included. It’s no secret that when the app launched, it was created as a safe way to sext.

After all… the picture disappears… right?

This is where parents really need to educate their kids about apps in general. Parents shouldn’t just provide a list of good apps and bad apps. That list will become outdated before the ink dries. Instead, parents should help their kids learn how to make wise social media decisions. For example:

So if you decide to let your kids use Snapchat, then make sure they understand two things:

So let me ask the question that I’m asked frequently from parents at my parent workshop:

Should I let my kids use Snapchat?

And my answer is: depends.

Again, I’m not one to provide you lists of good and bad apps. Don’t get me wrong, I like it when media experts like Common Sense Media post articles about the anonymous apps kids are using. But parents must always remember to not just give our kids a fish… but teach them to fish.

So if your kid wants Snapchat—consider this:

JONATHAN McKEE is the author of over 20 books, including 52 WAYS TO CONNECT WITH YOUR SMARTPHONE OBSESSED KID. He speaks to parents and leaders worldwide. Bring him to your city.

3 Replies to “Mom, Can I Have Snapchat?”