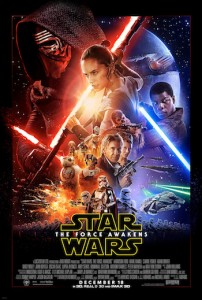 I just saw the best movie I’ve seen in a decade… twice!

For those who have been following my Insta or Twitter… you’ve been hearing little blips of my excitement about the new Star Wars film that premiered this weekend. I went with my son on opening day (official opening day, Friday… I’m getting too old for midnight premiers), and then again with my girls the next day.

It was so fun, not only as a 45-year-old man who saw the original Star Wars as a kid back in 1977, but also as a parent now seeing this film 37 years later with my own teens.

But don’t let me lead you astray; this film isn’t dependent on the momentum and nostalgia of the past films. Star Wars: The Force Awakens stands on it’s own. Star Wars fan or not, you’re gonna love this film. It’s creative, it’s compelling… it’s funny! The Star Wars franchise made a wise choice putting director JJ Abrams at the helm. He made a film true to the original… but with better acting!

One of my favorite moments in the film was watching my 18-year-old daughter Ashley watch this film. Ashley is a huge fan of the series, Episodes IV-VI (the original trilogy) far more than I-III. I watched her during the closing shot of the film, as she grew in eager anticipation (I can’t tell you why; I won’t spoil it). She became so emotional (I won’t tell you what emotion)… she literally teared up.

If you’re curious about our official two cents, check out our review on our MOVIE REVIEWS & QUICK Q’s page, including discussion questions and scripture.

2 Replies to “Best Movie of the Decade”