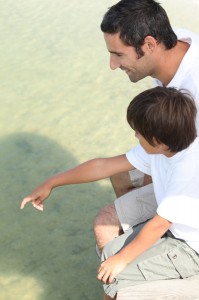 About 25 years ago I volunteered as a small group leader in the high school ministry of my church. It was there I met my friend Lorin, a man in his twenties who was discipling three teenage boys.

We love to throw that word “discipling” around, so let me describe precisely what Lorin did. Lorin met with these three teens once a week, encouraging them, praying with them, and studying the Bible-with these three he chose the books of I and II Timothy. After some time, the boys were so inspired by the teachings of II Timothy that they decided to memorize it… the whole book! So Lorin and the three boys memorized all four chapters. Every word.

Lorin built into these boys like the Apostle Paul built into Timothy.

A few years later, one of those boys named Scott became one of my youth ministry volunteers. As a young college student he began hanging out with young teens in my ministry and building into them.

Scott is now married with a kid of his own… and still volunteers in youth ministry. We all see Scott weekly-we see the product of Lorin’s investment.

Last week my friend Lorin began teaching a bunch of parents about discipleship, and guess what book we are all going through?

As we dug into the beginning of that book Lorin kept asking us, “Who is your Timothy?”

Discipleship is such a key part of youth ministry, and most likely you have some kids who are ready to be discipled among the cornucopia of young people you encounter each week.

Who is your Timothy?