The dust (and pink confetti) is slowly settling since the June 26th Supreme Court decision to legalize same sex marriage in all 50 states. The question is, how are Christians responding?

Barna released a fascinating glimpse last week revealing that not only Americans, but different denominations land all over the spectrum on this issue. For example, 53% of Catholics favor the Supreme Court’s decision (strongly or somewhat), where only 2% of Barna’s definition of an Evangelical favor the decision. At the same time, most the country seems to agree this decision was inevitable.

Barna breaks it down nicely on this chart: 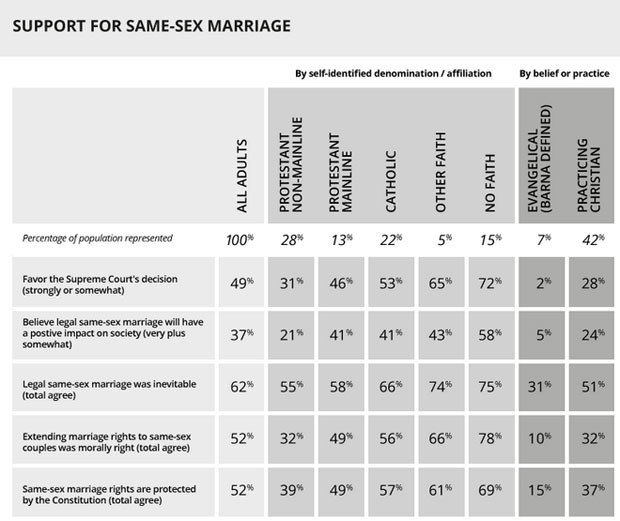 So the big question we should be asking is (and have asked before), how should we respond?

I love what Justin Anderson, pastor of Redemption Church in the middle of San Francisco, told Christianity Today:

“If the gospel is true, then eventually those whom Christ is saving and the Holy Spirit is revealing itself to will open eyes to see that this thing [the sexual revolution] is bankrupt,” he said. “We absolutely have to have open arms, and leave judgment and ridicule and ‘I told you so’ behind. We have to be ready with the gospel to welcome people into life and truth.”

How are you responding?