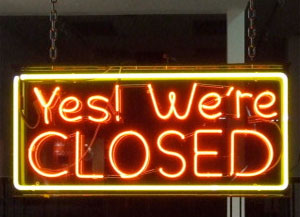 Last night when I finished teaching my More Than Just the Talk parenting workshop in Albuquerque, NM, a bunch of us went out to catch a late night dinner together.

One of the guys in our group, a police officer, looked at his watch confused and said, “Well… it’s 8:38.”

She said, “Well, it takes about 15 minutes to cook your food and that would only leave you about 5 minutes to eat.” She paused… registering her own words, then quickly added. “Not that we would kick you out.”

We all smiled and said, “Okay. No worries.” And left.

15 feet from the door we all paused and began debating. “What the heck just happened there?” We laughed and began discussing, “Do you think her manager knows she’s turning away large groups of customers 22 minutes before closing?”

So as we were all eating our dinner at Chipotle (who gladly welcomed our party of 15), the topic of discussion was, “Was this girl’s customer service shrewd?” We (most of us over 40) all thought it was ridiculous. But then one of the couple’s 18-year-old daughter showed up. Her dad chuckled as she was off ordering her food and told us, “Ask her what she thinks.”

I commented. “Oh, I know exactly what she’s going to think. She’s a Millennial. She’s going to side with the girl at Pei Wei.”

As we told this 18-year-old the story, we hadn’t even finished the story and she quickly retorted, “Oh, absolutely. That’s so rude!”

We all looked at each other confused.

She continued. “It’s rude to walk in when the restaurant is closing like that. People do that to us at Starbucks all the time.”

So… what do you think?

Was the Pei Wei girl right? Do you think the Pei Wei owners would approve of her actions? Or more intriguingly… is this younger generation going to invoke a new “employee first” customer service mindset that old customers (like me) will have to adopt?

12 Replies to “Was the Pei Wei Hostess Right?”