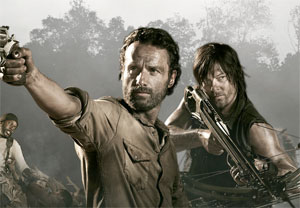 It’s nice when the most watched cable show happens to also be one of the most discussion-provoking shows on television. (And that’s why we post discussion questions pointing to scripture after every episode.)

I’m talking about The Walking Dead. The hit show had its mid-season premier last week, and it drew over 15 million viewers, ranking it not only the top viewed cable show that week, but also beating most broadcast shows. In fact The Walking Dead beat out American Idol, Empire, Modern Family, Scandal, Two and Half Men, Two Broke Girls… and almost everything else.

And what is the common theme of the show week after week: What is the right thing to do?

Week after week, the show is about morality. People love to discuss, “What would you have done?” In fact, about 3 million viewers tune into The Talking Dead each week simply discussing what happened that week on The Walking Dead. No show has provoked so many discussions (yeah, not even Lost, which, of course, was pretty lame by Season 5. The Walking Dead keeps growing in popularity).

“It’s too violent!” They always say.

Yep. No question. It’s violent. The show is about people surviving in a post-apocalyptic world with flesh eating dead walking around. Just be careful before you judge it. Last week I watched another popular show loaded with gossip, backbiting, and slander. Several of this show’s major plot points right now are a murder, a woman who gave birth to an illegitimate child, and a couple who just had premarital sex to see if they were compatible. Sound horrible? It’s a little show called Downton Abbey. (I confess, in all honesty, my wife and I really enjoy the show. Maybe you do too. Luckily, it hasn’t tempted me to murder yet.)

Don’t get me wrong. I’m not proposing you throw discernment out the window when making entertainment choices. Quite the contrary. Today’s programming is loaded with irresponsible entertainment and today’s Christians need to be leery of anything distracting us from the truth. But don’t dismiss all entertainment as evil. Entertainment can provide some great springboards for discussion about truth.

The Walking Dead is one of those shows for many. It’s a show provoking meaningful conversations. Not a lot of people are tempted to eat flesh after watching the show. In fact, most people are being prodded to think about morality and the ethics in daily decisions.

Are you using culture to engage in conversations about the truth? (a la Acts 17:16-34)

If you haven’t subscribed to the free The Gospel According to The Walking Dead blog, sign up HERE and get posts every week with discussion questions and scripture.