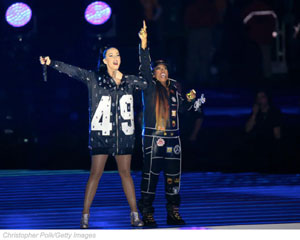 In my previous post I highlighted some eye-catching elements that many parents overlooked during last Sunday’s Super Bowl broadcast (and no, it had nothing to do with the Illuminati). In this post, I want to turn my attention strictly to the music.

Last Sunday morning Missy Elliott wasn’t on the music charts and certainly wasn’t on young people’s radar. But then Katy Perry invited her to come and perform with her in the most watched halftime show in Super Bowl history.

Now Missy’s experiencing a 1000% sales gain, with all three of the songs performed at the show in the top 10 of iTunes.

Having seen this phenomena before, I took a screenshot of the iTunes Top 10 chart on my phone moments before the Super Bowl. Then I took another screenshot the day to follow. All three of Missy’s songs rose to the Top 10 within 24 hours (over 70,000 downloads sold). 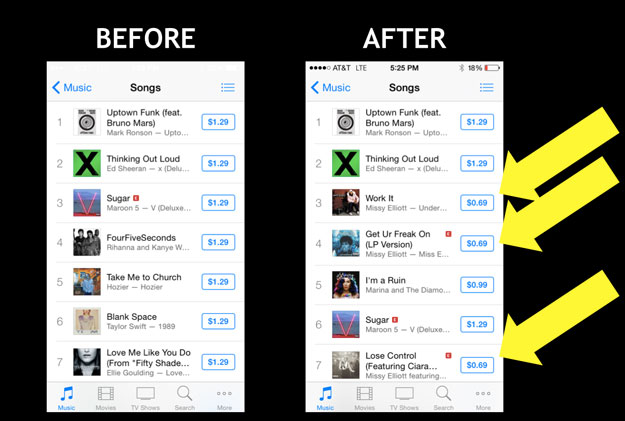 Many parents aren’t aware of the influence of television and music in young people’s lives today. Some of these parents saw Missy sing and simply thought, I can’t understand a word she’s saying! Kids might have had the same thought, but many of them were quick to Google, YouTube or even iTunes the song or artist to see what she’s all about. Isn’t it comforting to know that America’s most watched television program jumpstarted a song into viral popularity in less than 24 hours with these lyrics:

If you got a big ***, let me search you
And find out how hard I gotta work you
I put my thing down, flip it and reverse it [backwards 2X]
I’d like to get to know you so I could show you
Put the p***y on you like I told you…

I wonder how many young people YouTubed the music video? (Do you think parents know what their kids will find?)

Americans love their music. In fact:

Sadly, many of the songs at the top of the charts are sexually charged. Take a peek for yourself. Jump on the Spotify Top 50 right now and Google the lyrics of just the top 10 songs, or do what many kids do, watch the YouTube video. (Brace yourself for many of those.)

Rather than overreacting, are you using music to interact and provoke some meaningful conversations? No, I’m not suggesting you expose your kids to videos they aren’t already watching, but if a song comes on the radio when you’re in the car, or they are playing a song from their favorite playlist, don’t be afraid to ask questions. (We’ve got free music discussions- with questions and scripture- for several of the Katy Perry songs she sang at halftime on our MUSIC DISCUSSIONS pages on both our parents site and our youth ministry site.)

Music is an element I spend quite a bit of time talking about in my parent workshops across the country. Kids love music, parents are most often ignorant of the content, and neither are talking about it. 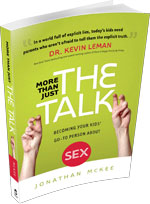 IF YOU LIKED THIS ARTICLE FROM JONATHAN, YOU’LL LOVE HIS BOOKS, SHOULD I JUST SMASH MY KID’S PHONE?, GET YOUR TEENAGERS TALKING, and the upcoming MORE THAN JUST THE TALK