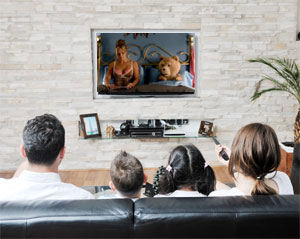 After spending an entire weekend with a couple thousand teenagers in South Carolina, my attention was immediately turned to the most watched television broadcast of the year in the United States: the Super Bowl. It was an intriguing transition.

The Super bowl is a distinctive television event. It’s not unique to adults, and it’s not exclusive to teenagers (a la MTV Video Music Awards). It’s an event truly watched by the entire family (the commercials alone are a huge draw for all ages- did you notice the ad for the new SpongeBob movie? And the new Ted 2 movie… wait… is that for kids?).

So what did I take away from this year’s Super Bowl?

One conclusion: the need for conversations.

Why did I arrive to this deduction? Simply because our country’s biggest “family entertainment” event offered plenty of moments that warrant discussion… and most families are not having these discussions. (For example: I just taught a workshop about what the Bible says about sex to a couple hundred teenagers yesterday, and countless teens could not attend because either their parents or youth workers thought these teens were not “ready to talk about this yet.” I’ll be blogging about this again soon, especially with the release of my new research on this subject.)

Don’t get me wrong; I’m not saying the Super Bowl was “bad” and we shouldn’t watch it. I’ve not even saying it was as sexually charged as most entertainment, or pushing the limits. It was actually quite mild by comparison. I’m just maintaining we live in a world that offers plenty of distractions for our kids and many of them reared their heads during the Super Bowl broadcast.

And that’s without the halftime show.

This year’s halftime show was pretty tame, by comparison (remember the “wardrobe malfunction”?) But do parents even know the content of the music that was performed? Do you think young people aren’t going to revisit or download some of that music this week?

I Kissed a Girl

Get Your Freak On

I just have one question for you.

Do you think our kids are ready to talk about some of this… or should we keep quiet and just hope they aren’t thinking about it?

RESOURCES TO INTERACT, NOT OVERREACT, ABOUT THIS WITH YOUR KIDS:

One Reply to “The Need for Super Bowl Conversations”