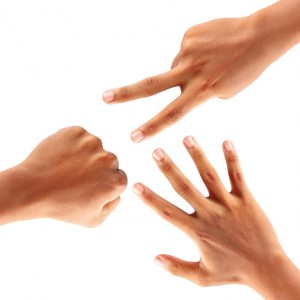 Earlier this week I shared a fun “no-prep” game, the kind that you can do on the fly to fill a void or liven up a party or event.

The nice thing about no-prep games is that you don’t  have to run to the store really quick and buy 100 balloons, cut 100 pieces of string and pass them out to everyone (although Ankle Balloon Pop is a great game).

Here’s another one I saw this weekend. Youth worker Bekah Miller ran this with her youth group- an old classic game with a fun twist:

Rock, Paper, Scissors Fan!
The game is a crowd game. Everyone plays. You tell everyone to grab a partner and play rock, paper, scissors– best two out of three. The winner moves on to battle someone else. The loser becomes their fan! The fan must cheer for their winner in the next battle.

Then, of course, after the next two battle, the winner will have three fans as he/she moves onto the next battle. Then seven fans… etc. Eventually half the room is cheering for one person, and half for the other (kind of like Ro Sham Bo Train).

A great quick game with literally no prep.

I love it. Other no prep games I love:

I need a shoelace (for any sized crowd)

The big squeeze (for big crowds)