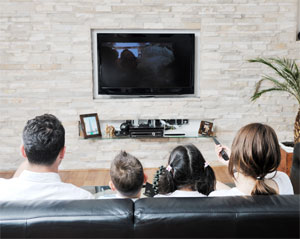 I like to glimpse at the Nielsen charts every once in a while to see what Americans are watching on TV. And recently… it’s been football, Big Bang Theory, The Walking Dead, even more football, and The Voice.

For those of you who don’t care how the numbers work… here’s the most popular shows “families” are watching, listed by me, derived from three lists (if you’re curious how I’ve come up with these numbers, keep reading below).

(and Simpsons, Modern Family, Family Guy and a few others are high with 18-49s, but not really competing overall, and American Horror Story is high for cable, but not overall)

Are these show always at the top? Yep. The same cluster is always near the top. For example, the previous week The Walking Dead premier actually beat out Sunday night football (more on that in this post of our blog, The Gospel According to the Walking Dead). But the same grouping was at the top.

So how come when you look at the charts in the paper you’ll see NCIS and Dancing with the Stars up there too? Good question.

A couple things you want to remember when you’re looking at the charts. First, the ratings most marketers target is those 18-49-year olds. That’s while you’ll see a chart for just that age group. That gives you a perspective of what most American families are watching, compared to the “total viewers” which includes many of the aging population (where NCIS always rises to the top of the list, because let’s face it, grandpa loves his NCIS!!!). And that’s another component to consider—the aging population watches waaaaaaaaay more TV than younger viewers. So grandpa and all his friends’ numbers skew the “total viewers” charts. Then there is cable, which is watched by everyone, but far less grandmas are watching The Walking Dead and American Horror Story, so you can be pretty sure those numbers reflect younger viewers.

So when I look at the charts on a site like TVbythenumbers.com, I look at three charts and compare the data. I look at this BROADCAST 18-49 chart to see what most families are watching during primetime on Broadcast.

Then I scroll down on that same page at the second chart listed, BROADCAST TV for all ages, looking at how many millions of total viewers (all ages) watched those same shows. I did that in this chart below (I added the red, noting which shows were on the top chart, and where). That chart reveals that football, Big Bang and The Voice ruled the top 8 spots. 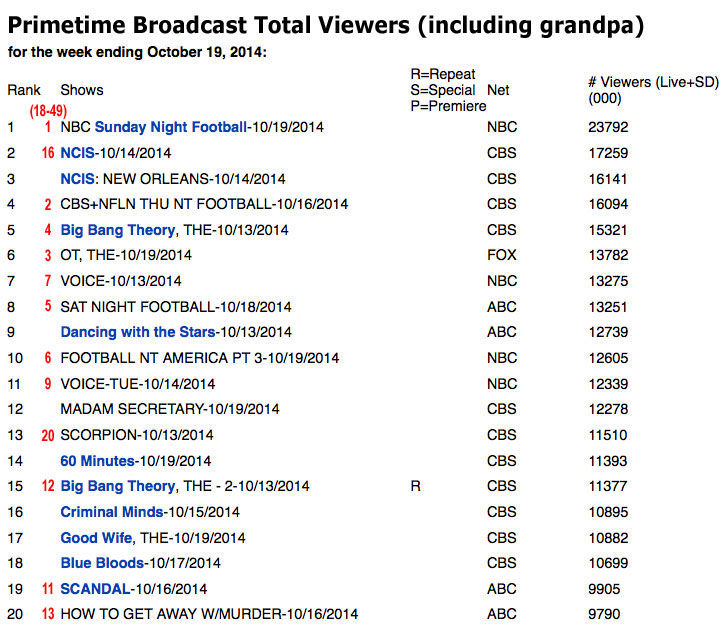 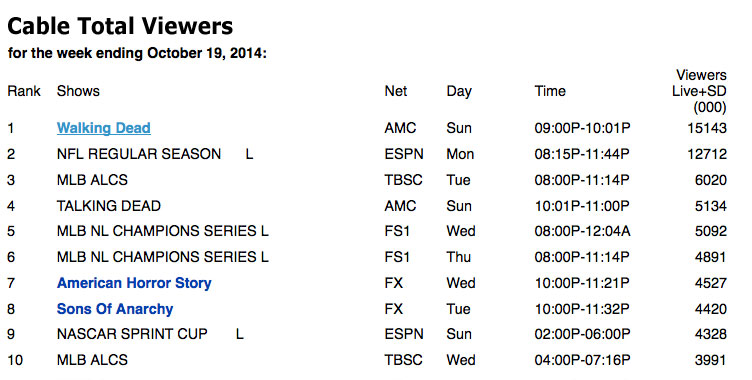 When you compare all this data, you get my list above.

It will be interesting to see if the newer programming sticks around. Scorpion is an interesting new drama, where a bunch of hyper intelligent nerds work for the government to “save the day” each week. Not a bad show for families.

The question is… what are our kids learning from all this programming?

2 Replies to “The TV America is Watching”