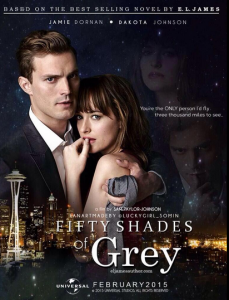 In my previous post I discussed the growing popularity and availability of sexually-charged entertainment, shows like Game of Thrones or the upcoming movie, 50 Shades of Grey.

Popularity, availability... how about the morality of these shows?

In a world where this kind of entertainment is commonplace or “no big deal”… I’m starting to hear a lot of Christians growing comfortable with it. The Millennial Generation in particular really likes Game of Thrones and doesn’t seem to have a problem watching it.

So that’s why I asked you the question. Is it okay? If we have put our faith in Christ alone and are being sanctified by Him, when does this modern “art” and entertainment become a distraction slowing us down, a sin that we need to “strip off” (Hebrews 12:1,2)? (I encourage you to read that entire post here. Many of you chimed in with your two cents. Thanks for your comments.)

In the beginning of my last post, I cited an article sharing John Piper’s thoughts on the subject. The article was titled, Does Nudity Make Game of Thrones Off Limits. When I first read the title, the word “nudity” threw me.

I actually liked his article, and agreed with much of it. But the word “nudity” was cast throughout the article as if nudity, in itself, was a golden calf or taboo element. This scared me a little bit. And here’s why.

Sex and nudity are not “naughty.”

Sadly, Satan has taken something very good and twisted it, even perverted it.

God created sex for men and women to enjoy. His creation began with a naked man named Adam in a garden, where God actually looked at him and said, “It’s not good for man to be alone.” (Genesis 2:18)

It gets better. God says, “Go forth and multiply.” (As if Adam even needed that command?)

When you read passages like this, or Proverbs 5, you realize that God created sex as an amazing gift between a man and wife. God even told men to enjoy their wife’s breasts (Proverbs 5:18, 19). If you think that’s explicit, then hold on to your hats, because this is the same God that designed the female genitalia. My friend Doug Fields in his new marriage book to men, 7 Ways to Be Her Hero, candidly expands on this, maintaining sex is proof of God’s amazing design.

“If your mind hasn’t already gone there, think about the female clitoris for a moment. Okay. that’s long enough. If you don’t know what it is (or know it by another name), it is part of the female genitalia. What is the purpose of the clitoris? …I want you stop and consider the why of that little location on your wife’s body. It’s purpose is simply for pleasure. That’s it! The clitoris plays no other biological function… Again, we pause to say, “Thank You, God. How wonderful is Your creation!”

This isn’t something sinful or taboo… it’s God’s design.

It’s God’s design for a husband and wife to share together uniquely.

But we are sinful, and constantly like to do things our own way. For example, since men like breasts, they think, “If my wife’s breasts make me so happy, I’ll be even happier looking at other women’s breasts too.” The rest of the Proverbs 5 passage warns us what happens when we follow this kind of logic. And Jesus talks specifically about what happens when we look at someone other than our wife and want her. It’s called lust (Matthew 5:27-29). He said two very sobering things to us in that passage:

So let me ask you; when you look at Michelangelo’s statue David, how many of you lust? 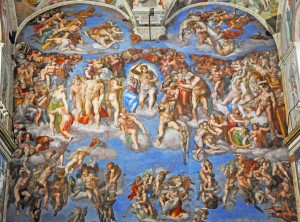 How about his painting The Last Judgement on the altar wall of the Sistine Chapel. How many people struggle with lusting when looking at that throng of naked bodies all on one wall?

I have a difficult time calling “nudity” wrong.

But much of today’s art, sexually charged shows like Game of Thrones and movies like 50 Shades of Grey, is designed to be provocative and (to use a movie category reference) “steamy.”

I can’t tell you if you watch Game of Thrones, you are sinning. Here’s all I can tell you. Paul talks about a bunch of sins in all of his writings (and he wrote a lot of the Bible). Of all his sins he describes, there is only one that he tells us to literally “flee” from.

In I Corinthians 6 he makes it clear:

18 Run from sexual sin! No other sin so clearly affects the body as this one does. For sexual immorality is a sin against your own body. (I Corinthians 6:18, NLT)

He uses the same term in his second letter to Timothy.

22 Run from anything that stimulates youthful lusts. Instead, pursue righteous living, faithfulness, love, and peace. Enjoy the companionship of those who call on the Lord with pure hearts. (2 Timothy 2:22, NLT)

So it’s really between you and God. Can you watch Game of Thrones without lusting?

Let me ask it another way. Have you grown comfortable with something that stimulates lust in your life? What do you have to do to “flee” this sin?

Take it from a guy who let lust turn into adultery, then murder… I’m talking about King David. In Psalm 139 he writes:

Search me, O God, and know my heart;
test me and know my anxious thoughts.
Point out anything in me that offends you,
and lead me along the path of everlasting life. (Psalm 139:23, 24, NLT)

Maybe we need to take a personal inventory like that with our entertainment choices.

Or consider the simple appeal to God from the author of Psalm 119:

Turn my eyes from worthless things,
and give me life through your word. (Psalm 119:37, NLT)

It’s not easy living in a world so full of distractions. It’s even more difficult being a parent and trying to teach adolescents how to make good media decisions. But cling to the truth of the word and let it guide your decision-making.

That doesn’t mean boycotting Michelangelo… but it might just mean cancelling that HBO subscription.

JONATHAN IS THE AUTHOR OF OVER A DOZEN BOOKS LIKE THE UPCOMING (SORRY, IT DOESN’T RELEASE UNTIL MARCH 2015), MORE THAN JUST THE TALK.

3 Replies to “Should I Watch Game of Thrones, PART II”