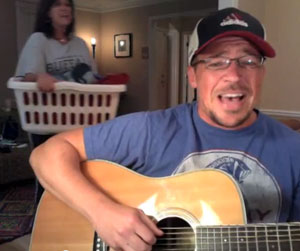 Magic’s song “Rude” has been at the top of the charts for over a month now, currently at the No. 1 spot on Billboard, Spotify and iTunes. And now, a parody of the song is going viral on YouTube.

Magic’s version (the one you hear playing in Target, the Grocery Store and the gas station literally every hour of every day) is a song about a young man asking his girlfriend’s dad for his daughter’s hand in marriage. When he find’s out the answer is “no’, he decided he’s “gonna marry her anyway.”

Here’s a peek at some of the lyrics:

Saturday morning jumped out of bed
And put on my best suit
Got in my car and raced like a jet
All the way to you
Knocked on your door with heart in my hand
To ask you a question
‘Cause I know that you’re an old-fashioned man, yeah

Can I have your daughter for the rest of my life?
Say yes, say yes ’cause I need to know
You say I’ll never get your blessing ’til the day I die
Tough luck, my friend, but the answer is ‘No’

Fun song, very catchy… and when it first came out, it kicked off some pretty intriguing discussion in my car. Another perfect opportunity for parents to ask teenagers a simple question then just listen. (I’m always on the lookout for springboards that Get Your Teenager Talking)

When I heard this song, I simply asked my daughters, “Is he right?”

Boom… heated discussion. (Is this young man a brat or is this dad too ‘old fashioned’ and controlling? Do young men still need to ask for permission, or is that a dead ritual?) I’m always amazed at the effectiveness of well placed questions rather than lectures.

Apparently my car wasn’t the only place this song was being discussed. This creative little ditty even provoked Time Magazine to ask etiquette expert Lizzie Post to chime in and answer, “is this really rude?” Post provides an interesting little history about this tradition.

And when a song gets this popular, it doesn’t take long for a fun parody to release, and this particular one has already garnered over 7 million YouTube views. Let’s just say this is “Dad’s version” of the song.

This is kind of perpetuating the medieval concept that a marriage should be decided among two men (the father and the husband-to-be) and that the daughter has no say in the matter. Why can’t he trust her to marry who she wants?

I know people say that it’s a joke and shouldn’t be taken seriously, but the fact that this video can be made and that people are supporting these ideas are showing that sexism is still around, even if it’s not on a surface level.

HERE’S OUR FREE “RUDE” MUSIC DISCUSSION FOR PARENTS, INCLUDING SCRIPTURE AND DISCUSSION Q’S