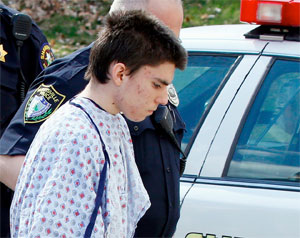 It’s the one question no one can really answer at this moment describing the rampage 16-year-old Alex Hribal embarked on yesterday at Franklin Regional High School in Murrysville, PA. One can only speculate.

His attorney is saying he is just a normal kid. Most are saying he was “shy”, “quiet” and “small.” Some are already using words like “bullied” and “teased.” Like Alex’s classmate who described the teasing as “relentless” at times.

“They just said things. They’d ride him and ride him, and today was the day that he snapped.”

I felt a unique twinge in my spine when I read that quote… because I remember that feeling. I know that emotional state well, not from studying youth culture, or writing and speaking about bullying, but from hearing the jeers and pokes from my classmates in my early teen years.

How many young people can just sit and endure ridicule?

We have yet to discover why Alex snapped, but I’ve studied a long list of names—kids who “snapped” and engaged in a rampage of mass violence. Luke Woodham, 16, killed two students and wounded seven on October 1, 1997. He and his friends were labeled by many as outcasts. Or how about Mitchell Johnson, 13, and Andrew Golden, 11, who sat in the woods outside Westside Middle School on March 24, 1998 and shot at their classmates and teachers as the school emptied during a false alarm.

Columbine’s Eric Harris and Dylan Klebold are probably the most well known assailants, killing 13, wounding 24, and eventually turning their guns on themselves. This explosion of passive aggression might have resonated with likeminded individuals across the continent more than many realize, because an echo of similar outbreaks happened in the next days, weeks and months:

April 28, 1999, Taber, Alberta, Canada
Just eight days after Columbine.  One student killed, one wounded at W. R. Myers High School in first fatal high school shooting in Canada in 20 years. The suspect, a 14-year-old boy, had dropped out of school after he was severely ostracized by his classmates.

May 20, 1999, Conyers, GA
One month after Columbine.  Six students injured at Heritage High School by Thomas Solomon, 15, who was reportedly depressed after breaking up with his girlfriend.

I’ve poured over these lists in the last decade, read the bios, watched the videos. I find it intriguing to note some of the common denominators.

Those words could almost be listed as a pattern or progression. Shy kids are teased, and, in turn, isolated. Think about it. How many kids do you know who are going to cross that social barricade and sit next to the awkward kid who people are giggling at?

Speaking from personal experience, this kind of jeering and isolation is tough on a kid’s psyche. It’s not surprising when mental issues emerge. Yes, this might be a ‘chicken or the egg’ argument… who knows if the mental issues were already there, causing the social backwardness, or vice versa. Regardless, the traits are all there.

At this point the situation only spirals. The social awkwardness often increases. Who is going to invite this kid to their birthday party? Ignored, he will only seek out isolation even more, making every effort to avoid any contact… because connection with others usually ends badly.

This shy, teased, isolated kid will be left to work out his feelings of anger and resentment on his own. Some of these kids take their own life… some attempt to take the lives of others.

Hope
As I think about this archetypal bullied, teased, isolated kid and the pain he or she is going through, I don’t give up hope.

Last year a film slipped through the cracks. This film was not only a gem in modern cinema, it revealed an effective cure, a happy ending to this seemingly hopeless plight. The film is The Way Way Back, a story of a shy lonely kid who might have just gone unnoticed until a caring adult who worked at a water park happened to notice him.

And that was the key.

A caring friend noticed someone who didn’t even necessarily want to be noticed. But the friend pursued… and the rest is history.

Jesus noticed people who didn’t necessarily want to be noticed, then he connected with them, with no worries what others were thinking.

What if we took time to “notice” the shy, the teased and the isolated?

What if we set our own selfish aspirations aside for a moment and truly “looked to the interests of others”? (Philippians 2:4)

How would Alex’s story been different if someone had noticed him, crossed that social line, sat next to him and said, “Hi, my name is Chris, can I eat lunch with you?”