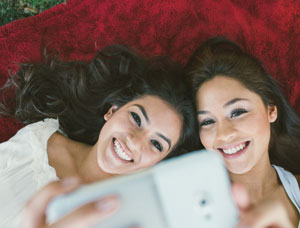 Within seconds the selfie pic is posted to Instagram, and Tweeted to her 326 followers. Just another emblematic snapshot from the life of today’s teen.

Five years ago we didn’t even know the word “selfie.” Fast forward to the end of 2013 and it was declared “word of the year.”

What’s the fascination teens have with selfies? Does this desire to snap pics in everyday life make them narcissistic?

When most people hear “selfie,” they probably think of a teenage girl shooting a picture of herself, with some caption about her outfit, her mood or the day. Are these young people a little too obsessed with images of themselves, or is this just the norm?

I guess that depends what you call norm. A brand new PewResearch survey reveals that 55% percent of 18 to 33-year-olds have posted a selfie on a social media site, more than any other generation. So is a little over half, the norm? 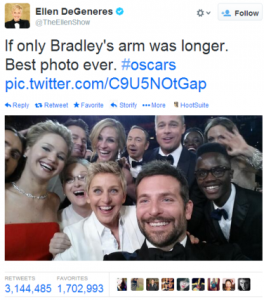 The term “selfie” might be misleading. Sometimes selfies include friends or groups of friends. Ellen DeGeneress’s famous 2014 Oscar selfie is a prime example. Her tweet of the Bradley Cooper selfie, with everyone from Brad Pitt to Jennifer Lawrence squeezing into the frame, was retweeted over 3 million times. This high profile pic is probably a good representation of what many teens want from their selfies: capturing a fun moment in history and documenting it in social media.

Maybe that’s why a teen girl will snap a pic of herself ordering her favorite coffee in the morning. “I’m gonna need this today!”

To the outside onlooker, this might seem a little vain or self-absorbed. Look at me! After all, selfie sure sounds a lot like selfish. What is the motive behind each of these pics?

Many of this young generation are critical of the selfie. Sadly, the loudest critique is that of the increasingly popular anonymous critic who shames people in the comments of social media sites, protected by his mysterious screen name: @DBag247 (I made that up… although I wouldn’t be surprised if it was someone’s screen name). This person loves to post cruel comments on selfies, with just enough truth in them to really hurt.

“You probably are posting this pic so we’ll tell you how beautiful you look, when really you’re just a needy girl with daddy issues! Sorry, not gonna conform! #whore”

Maybe that’s why we’ve seen anti-bullying selfie-centric apps arising. Or maybe that’s why so many teens just resort to Snapchat to communicate with their friends, where you can exclusively select those who are going to see the pics. It may be no coincidence that 70% of Snapchat users are females. Girl talking to girl, without any guy onlookers, casting their cruel opinion from the peanut gallery.

Perhaps one of the most accurate criticisms I have heard about selfies was from teenager, Olympia Nelson, in her gritty and slightly sassy expose about the dark undercurrents of the teenage girl’s selfie. In this candid piece, Nelson unveils the intentions behind the teenage selfie:

On these ubiquitous portals, the popularity of girls is hotly contested over one big deal: how sexy can I appear and bring it off with everyone’s admiration?

That’s the reason we see mirror shots, pouting self-portraits of teenagers (typically female) and sexually suggestively posed girls in a mini-dress ”before a party last night”. They’re showing how much they like themselves and hoping that you’ll hit ”like” to reinforce the claim.

Is she right? Is it a coincidence that Nelson just happens to be a little more articulately saying the same thing as @DBag247?

Are teenagers, especially girls, just looking for reinforcement because they want to hear, “You’re pretty,” in a world where most girls think they aren’t?

Or is life just too full of images to ignore documenting some of them along the way?

Why do you think your teens take selfies?

LOOKING FOR WAYS TO OPEN UP THE DOORS OF DIALOGUE WITH YOUR TEENS? YOU’LL LOVE JONATHAN’S BRAND NEW BOOK, GET YOUR TEENAGER TALKING

5 Replies to “Young People and Selfies”