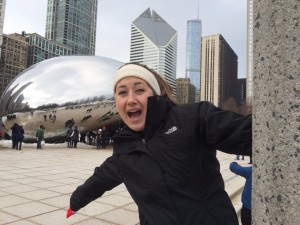 Eleven days, ten nights… over a week on the road with Mom and Dad. Poor Ashley!

Ashley is my 16-year-old, and for the last six days, she’s been in five cars, one plane, four hotels and three states with Lori and I. And we’re only halfway into it.

It’s not torture for Ashley, but it’s not her first choice for her winter break. “All eleven days? I can’t hang with my friends for any of it?!!”

Her 18-year-old sister Alyssa thinks she’s nuts. “You’re stupid Ashley. You get to go to both Chicago, and Canada in one trip! Suck it up. You’re lucky you get to experience these places.” Alyssa begged to join us in Chicago. I found a $200 round trip ticket from near her college in Southern CA, and flew her out to join us for the first weekend.

I don’t always get to bring my family on these trips, but the planets happened to align for this one. I got booked in three spots within 6 hours of each other within a 10-day period on a week Ashley happened to have off of school. As a guy who travels two weekends per month away from the family, this opportunity was too good to be true. So I booked it. 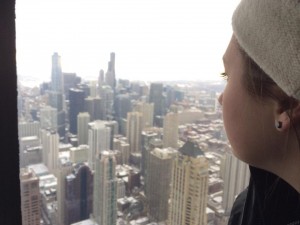 The trip has been a blast. We started in the Chicago suburbs where I spoke last weekend. I finished Saturday at noon, and we were dropped off in the middle of the city by 3:00 in the afternoon. We spent the next three days enjoying Chicago sites and cuisine: Michigan Avenue, Giordano’s Pizza, The Hancock Tower, Portillo’s, the Art Institute, Lou Malnati’s, the Bean, Garrett’s Popcorn… we did it all!

Tuesday we drove near Port Huron Michigan, where I speak tonight. But not after we drive across the border to Canada for the day. Tomorrow, it’s back to Chicago, then Wisconsin where I speak to 500 middle school kids at my favorite camp in the US… Timberlee.

Ash is earning a little money while on the road, working my book table. This adds a little sugar to the cough syrup.

All said and done… we’ve had a blast. It’s been a great time hanging out just the three of us. Wish Alec could have joined us and Alyssa could have stayed longer than 3 days. But we’re glad to have this two-on-one time with our little girl.

Now… just need to figure out how to lose the 7 pounds I’ve probably gained on this road trip!

2 Replies to “On the Road with Mom and Dad”