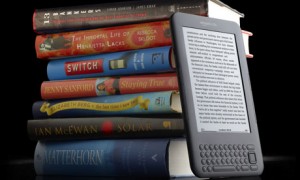 This week someone asked me, “Has the shift towards Kindle and iBooks hurt your book sales as an author?”

For me the answer was easy. “Not at all. I think it’s helped it.”

Yes, it’s a fact e-readers are growing in popularity. According to a new PewResearchCenter report last month, “the percentage of adults who read an e-book in the past year has risen to 28%, up from 23% at the end of 2012.” But this same report reveals most people who read e-books, also read print books, with only 4% of readers being e-book only.

Why am I not concerned? Probably because most my books are offered in both formats. My new Get Your Teenager Talking book, releasing in April, is listed on Amazon right now for $9.74 for paperback, and $9.99 for Kindle. Take a quick guess which one publishers make more money on?

Another advantage of the e-reader is the “pre-release.” My friends over at The Youth Cartel mastered this one with their release of my The Zombie Apocalypse Survival Guide for Teenagers. They shrewdly pre-released the book on Kindle about 3 weeks before the official print release date. During that period, a number of my readers bought the book and posted reviews before the print release, building some momentum on Amazon. This amped up the book’s Amazon ranking and increased Amazon’s order from the publisher so they moved more books quickly. Barbour books will be following that same model for the release of my new Guy’s Guide to God, Girls, and the Phone in Your Pocket this March/April.

As for me personally… I prefer the good ol’ paperback!

Which do you prefer?

TAKE A PEEK AT ALL OF JONATHAN’s BOOKS HERE

2 Replies to “Scared of e-Readers?”