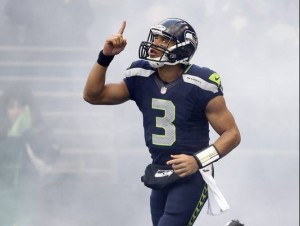 When you think of the Seattle Seahawks, maybe “Jesus” isn’t the first thing that comes to your mind, but you might be surprised how many of the team’s roster are followers of Christ… even their quarterback, Russell Wilson.

If you follow my Facebook or Twitter, you know two things about me and football: I’m a Broncos fan (and finally a good year to be one), and I really don’t like the Seahawks. As a matter of fact, whoever is playing the Seahawks… that’s who I’m rooting for!

Despite my disdain for the Seahawks, I have to admit… I’ll be secretly rooting for Russell Wilson Super Bowl Sunday.

Check out this inspiring interview of Wilson, coach Rocky Seto, and other Seahawks players like Chris Maragos and Russell Okung:

It’s nice to see the raw humility and Kingdom perspective. “If we were to win the Super Bowl… Jesus is still better.” Here’s another YouTube video of Wilson, coach Seto and others sharing even more of their story.

Notice the stark attitude contrast to… for example… this guy:

So amazingly talented, yet so incredibly cocky. Defend him if you like… some have… but I’ll defer to the great coach Tony Dungy in his Tweet shortly after Sherman’s interview:

“Richard Sherman made the play to win it. But show a little class Richard.”

So despite Sherman’s constant trantrums, and my love for the Broncos… I must say, I won’t be bummed if Wilson and these other guys get a ring Super Bowl Sunday.

Side note: if you’re having a Super Bowl party, you might like this. In our quiver full of free resources for youth workers over at TheSource4YM.com, we always provide some fun tools for your Super Bowl parties, linking games, and videos like the Seahawks video above. We also provide an annual Super Bowl Quiz to liven up your Super Bowl Party (here’s last year’s quiz). Watch for this year’s quiz on that same page in the next week!

4 Replies to “The Seahawks… and Jesus?”