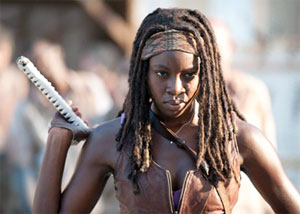 Last week after watching the record-breaking premiere of The Walking Dead, I once again was captivated by the series’ ability to provoke discussion. The series has an amazing ability to stir people to talk about what they just saw.

That’s why we launched “The Gospel According to The Walking Dead.”

The Walking Dead is not only one of the most popular shows on television, it’s one of the most discussed. Sure, people like Duck Dynasty, but you won’t find a lot of water cooler discussions happening the next day discussing why Godwin decided to put his $200 hot tub in the front yard. You will, however, find countless circles of people debating about the three questions established by The Walking Dead’s new council of leaders in the first episode this season. (Which is why I wrote discussion questions about that very topic.)

Jump on the front page of our TheSource4YM.com and you’ll find a new box with a weekly updated The Gospel According to The Walking Dead post. I write this blog and post it each Tuesday. Each post provides discussion questions that point to scripture (much like my book for teenagers, The Zombie Apocalypse Survival Guide for Teenagers).

After a week of waiting in anticipation after last week’s cliffhanger ending of Season 4’s record-breaking premiere episode of The Walking Dead, audiences are beginning to fear a new enemy this season… the virus.

An impressive 13.9 million viewers returned to watch The Walking Dead Sunday night, a number not quite as large as the week prior, probably because many people were like me, watching Payton Manning return to Indy to battle the Colts, only to watch a recorded The Walking Dead the next day. Episode 2, “Infected,” still drew the second biggest audience for the show, and probably will prove to be the second most watched show of the week, only beat out by the Broncos’ depressing loss.

“Infection” began with a dead Phineas… er… I mean… Patrick (who will ever be known to teenagers as the voice of the beloved cartoon character Phineas) roaming the halls looking for flesh—a gory beginning to Episode 2.

Chaos ensues, over a dozen are killed, and the newly formed council decides to began isolating those who were exposed to this apparent virus.

Meanwhile, Michonne seems to be fighting an internal battle… fighting to not “care.”

That’s what I love about this series; each show always provides some great points of discussion about real life, despite the fictional premise. The Walking Dead fans know Michonne is damaged goods. (Who isn’t in this fictional post-apocalyptic world where the dead walk?) And like many who have lost loved ones, Michonne resists drawing close to people because she knows if she cares… she risks hurt.

CLICK HERE FOR ALL THE POSTS TO THIS NEW BLOG

2 Replies to “The Gospel According to The Walking Dead”