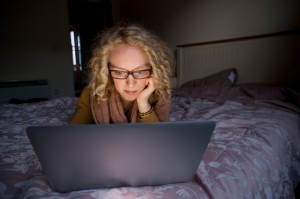 That’s what the headline says, and I’m inclined to believe it. Think about it. College kids, in dorms… how many of them have DirectTV? Not many. My son and daughter (both in college) binge more on Netflix than anything else. Tired of studying? Catch up on three episodes of Breaking Bad in one sitting. Alyssa (a college freshman) watches live TV only once a week, The Walking Dead, on Sunday nights in the lobby of one of her dorms, with about 50 other students crowded around one TV (After all, the show’s premiere was the most watched show by those 18-49 this entire fall season). Most her TV consumption is binge-watching of a TV series on Netflix.

So is this what what most Millennials are doing?

I’ve warned you before… don’t just read the headlines, because they are often misleading. In this case …true again.

This article from Mashable reads, “34% of Millennials Watch More Online Video Than TV.” The article goes on and on about how broadcast TV is waning and more young people are watching online video at least once a day. All true.

But they leave out the most glaring statistic: the majority of people, including Millennials, watch mostly normal live TV. Take a peek at their own chart here: 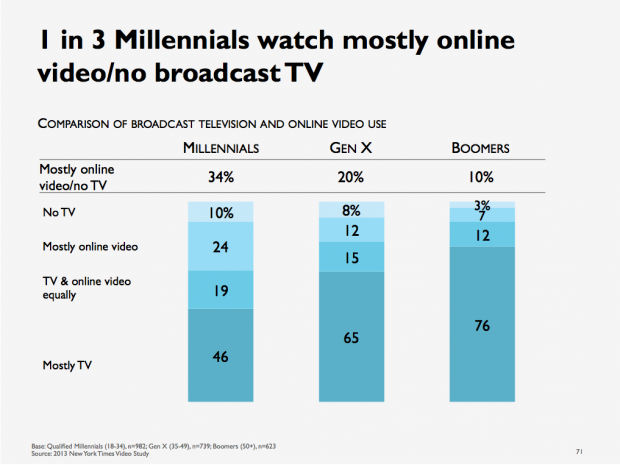 According to their own chart, 46% of 18-34-year-olds watch “mostly TV,” their term for normal live TV. In other words, most people in that age group watch normal live TV. In fact, all age groups watch mostly live TV. Seems like this would be something worth mentioning in the article, dontchathink?

Nielsen has been reporting this for years.

Yes, I think this is slowly changing. DVR use is rising, Netflix is gaining popularity, And if you ask a young person what they favor, they’ll choose their online device almost every time. But interestingly enough, when you really add up the numbers of what screen they are sitting in front of most the time… by most studies, their butts are clocking more hours in front of the plain ol’ live TV. So what do you listen to, their opinion… or their butts?

Bottom line: Kids are soaking in a ton of entertainment media and screen time. With a smartphone in the pocket of nearly 70 percent of 13-17 year-olds, and people averaging several hours per day on this device alone… we better be teaching our kids some discernment. If not… what do you think they’ll watch when they’re out on their own?