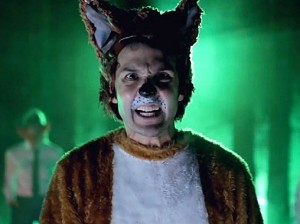 From viral YouTube video to Jimmy Fallon to the top of the charts, and it’s just a bunch of guys dressed as animals performing a song that sounds like something from Sesame Street.

You can’t argue with numbers. Young people are going crazy over the viral hit, What Does the Fox Say? by the Norwegian brothers known as Ylvis. The song, which began as a joke, became a viral YouTube video, and it has exploded in popularity. Ylvis performed on Jimmy Fallon last week and the song currently is No. 6 on the Billboard Hot 100 charts and in the top 10 on iTunes as well.

My daughters showed it to me about 10 days ago and I used it in my seminar’s pre-show as people were walking in. Sure to get a laugh.

Take a look at the video:

9 Replies to “What Does the Fox Say?”