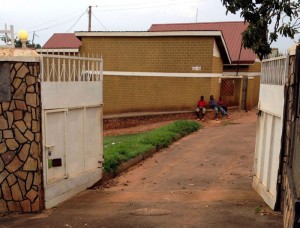 Here’s a puzzle to solve. No, it’s not a riddle or a mind bender. It’s a true ministry dilemma sure to spark discussion among people with a passion for ministry  (Which is the exact type of ‘case study’ I liked to always drop in the laps of my leadership team).

When I was in Uganda I visited a youth group made up primarily of international students from a certain private school. The kids were mixed racially and from various countries, but all were from financially stable homes that could afford to send them to this particular institution.

The youth group met at various houses on Friday nights. The week I visited, the gathering was a BarBQ at the youth pastor’s home.

When I arrived, they opened a large gate to let me in, then promptly shut the gate behind me. Most middle class houses in Kampala, Uganda had walls and gates to prevent theft.

As teenagers from the school began arriving, they would knock on the gate, someone would let them in, and then close the gate.

After this happened a few times, I couldn’t help but notice neighborhood kids lurking across the street from the youth pastor’s house. They could smell the BarBQ and were intrigued with the gathering of teenagers at the home. But the gate wasn’t open for these kids.

I asked the youth pastor the obvious question, “Who are those kids across the street?”

“Oh,” he replied. “Those are kids who live in the neighborhood.”

“Should we invite them in?”

The youth pastor was noticeably torn. He thought for a moment and tried to explain. “It’s hard, because those kids are so different than these kids. If I invited them in we wouldn’t be able to have any discussion.”

I paused and thought about his words. Uncomfortable with the silence, he offered further explanation. “Ya see, these kids are pretty intellectual. They’re highly educated and are used to discussing issues at length. If we opened it to the public, conversation would be stifled.”

I pondered the situation. I’d seen the exact scenario countless times in America—diverse kids with divergent interests. I proposed an idea. “What about having deep discussion with your kids on one night, then doing something open to everyone another night? You could even use it as an opportunity to develop the missional perspective of these international students.”

The youth pastor looked at me and answered me candidly. “I just don’t have the time.”

As uncomfortable as it sounded, this guy’s time was already overloaded. He was raising his own support, working two jobs and working overtime trying to reach these international students. The thought of adding ‘another night’ sounded kindhearted and just… but how much is too much?

Another student knocked on the gate. The gate opened and I looked at the kids sitting across the street.

What is the answer to this quandary?

Are there any subtle messages these international students are learning from this situation currently?

13 Replies to “The Kids Outside the Gates”