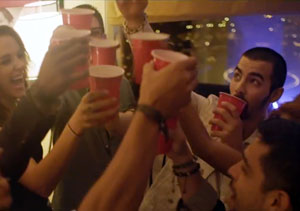 I like to keep an eye on the music charts and see what young people are putting in their heads. The next few months, and even weeks, will be interesting, because new music is on its way from Katy Perry (Aug 12), Lady Gaga (Aug 19) and others. But among these, it was the new Jonas Brothers music video that caught my attention.

Unlike so many artists today who become the heroes and role models of kids today, The Jonas Brothers seem to have kept a pretty clean slate. Back in 2008 we wrote a little about this popular boy band that was keeping it clean like Miley was at the time, just before her downward spiral over the next 5 years.

After a long silence, the brothers are emerging on the scene again, all grown up, shooting “selfies” to prove it, and with their first release of any kind since Camp Rock 2. Take a peek at their new music video, First Time:

So I’m really trying to take my own advice now and not overreact. Two weeks ago in my article, The Naked Truth, about the rise of sex and nudity in American entertainment, I advised parents and adult mentors to “interact” with their teenagers about the racy images they are bombarded with, instead of overreacting (which we are so good at doing).

So how should we respond to this new song and video from The Jonas Brothers?

I guess we should probably analyze it the way we’d analyze any entertainment. With songs or music videos like this, we should look at the lyrics and images objectively, and compare it with the truth of the scriptures.

The Lyrics:
Here’s a snippet of the lyrics:

Come on let it set you free
Right here, right now where you’re supposed to be
Oh-oo, oh, oh-oo, oh, oh
Make it feel like the first time

So let’s toast to the good life (good life), yeah, yeah
Just let go and free your mind (free your mind)
Let the beat (let the beat) be your lifeline (lifeline)
Make it feel (make it feel) like the first time (first time)

These lyrics are nice and vague. So by today’s standards the song is already pretty clean. We have no idea what they’re really saying when they say, “make it feel like the first time.” Perhaps they are remembering waterskiing, recalling that rush when they got up for the ‘first time’ on one ski? Or maybe they are reminiscing about their ‘first time’ eating Snickers Cheesecake at the Cheesecake Factory.

Context of the song and music video reveals they are cruising through Vegas, partying, feeling the beat, so it’s probably not waterskiing or cheesecake. I guess it’s up to the listener to decide what “feel like the first time” is.

Should we be more concerned about the lyrics, “just let go and free your mind”? This all to common theme of “just let go” or “just lose control” is common in today’s music (a trend I’ve talked about before), something we just discussed in our new Music Discussion of Miley’s song, We Can’t Stop. I find it good to compare these messages to the truth of Galatians 5:

But lyrics can often be different than the images we see on the video.

The Images:
The video is also clean by today’s standards in that there’s no gratuitous nudity—that’s a start. It also forgoes the route of making women sex objects. Sure, there’s the typical “eye candy” that you’d see walking along any hotel poolside or beach, but let’s not overreact and call it something it’s not (although we might wonder why our 13-year-old boys want to watch the video over and over again).

In the music video the brothers get into their sweet ride, cruise through Vegas, go to (or possibly even host) a party/parties, drink something out of a red solo cup, play a little beer pong, go gambling…

Ultra conservatives could easily crucify this video: drinking, partying, gambling… such is the house of Jezebel!!! Other believers might say, So what? They aren’t getting drunk, rolling a few dice isn’t bad, and a little dancing doesn’t hurt.

Since I don’t see them actually getting drunk, gambling out of control, or hooking up… why am I worried?

Maybe I’m coming to this music video a little biased. If this was Lil Wayne’s newest video, I’d think, Wow, pretty clean for Lil Wayne. But since I know these are three guys who were raised in the church, who know the truth, who have been positive role models for kids across the world… my expectations are a little higher. I would hope they wouldn’t lead kids astray in any way.

My Concern:
Sadly, many people who embark on a night like this in Vegas, drinking what you typically pour into red solo cups, gambling… all the while repeating the words “just let go and free your mind” … I am worried.

Maybe it’s just those high expectations I had. I honestly don’t know.

I’m not saying parents should banish this song and video. But I sure hope that they would talk with their kids about the reality of these activities. I know I’ve been talking with my girls about drinking.

To Nick, Kevin and Joe:
Jonas Brothers, if you read this, I can’t throw stones. I’m as imperfect as they get. But as a dad of two teenage girls who loved Camp Rock and own many of your songs, I pray you guys realize you are being watched and imitated by literally millions of young people who love you. Your words are being quoted and repeated, your actions are being copied, and your lifestyle is even being coveted. I pray you weigh that responsibility heavily, because with fame, comes great obligation. You are a role model, whether you like it or not. You influence kids.

7 Replies to “Responding to The Jonas Brothers’ New Music Video”