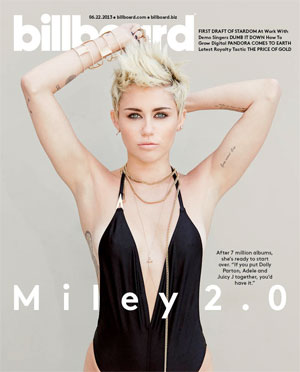 “Yikes. Now she is getting crazy.”

“Miley? Knock knock… U still in there… (broken heart icon)”

“She’s trying way too hard and it’s embarrassing to watch.”

Those are the top three comments on Miley Cyrus’ new We Can’t Stop music video on iTunes today. Even many of her fans seem to have lost hope in her. I read 20 comments and less than half were good.

I can’t say I disagree with her “fans.” Miley is a young woman with enormous potential, but her standing as a role model for young girls is rapidly morphing from Hannah Montana to Lindsey Lohan. It’s been sad watching Miley’s moral decline over the past 5 years (scroll to the bottom of this post where I provide quick-links to Miley’s antics over the past 5 years).

“When she’s not twerking, spanking her pals or dry-humping the bed, the 20-year-old is seen dancing with teddy bears and making out with her Barbie doll alter-ego in the pool. Smoke billows from crotches, paint spills from hands and Miley continues to think that wearing sunglasses indoors is cool.”

Of course, none of these moments contain nudity or curse words… so the video is deemed “clean” by iTunes and YouTube. Check it out for yourself. After all… it’s “clean”:

As of right now, the song sits at No. 2 on iTunes songs, and No. 3 for music videos.

I miss the old Miley that my two girls used to watch years ago.

Let’s take a look at my blog posts about some of Miley’s moments over the years:

February 6, 2008 post– Miley’s show dominates #1 spot for kids, and Miley grows to be one of the biggest role models for young girls (my girls were 10 and 12 at the time), despite a few accusations of racy pics

February 28, 2008 post– Miley talks about her faith in her Barbara Walters interview after the Oscars

April 28, 2008 post– Annie Leibovitz takes seductive pictures of Miley for Vanity Fair. Miley apologizes to her fans. I provided discussion questions for parents about the incident.

August 5, 2008 post– I applaud Miley for turning down Katy Perry’s offer to kiss her at the Teen Choice Awards.

August 11, 2009 post– Miley dresses trampy and does her famous “pole dance” at the Teen Choice Awards.

May 14, 2010 post– Miley caught grinding with The Last Song director, and her dad Billy Ray says, “It’s what people her age do.”

November 16, 2010 post– ABC News special Too Sexy Too Soon reveals the harmful effects of our daughters being sexualized by role models like Miley today

February 22, 2011 post– Part II of my post about the Billy Ray interview, where he shares that he should have been a parent instead of a “friend” and should have said, “Enough is enough.”

So what’s next for Miley?