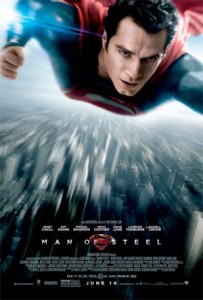 Summer movies are always fun, especially when they involve super heroes… and free movie tickets! So you’re gonna like this.

I’ve got two movie passes for anywhere in the US to the new Superman movie, Man of Steel, opening this Friday night, June 14. And just for fun, we’re throwing in two Man of Steel t-shirts and key chains (yeah… we’ve gone full nerd!) More on how to win that in a second. (WINNER POSTED- see below)

If you don’t win the tickets and nerdwear, you can still enjoy some free resources from us. We’ve just posted a few things:

1. David wrote Part II of our Summer Movies article on our Youth Culture Window page. Check out what films kids will be watching this summer! (Part I was posted a few weeks ago)

2. Alec just attended the Man of Steel screening, wrote his review and provided some discussion questions you can use on our Movie Reviews & Quick Q’s page.

So here’s the contest for the free Man of Steel stuff: simply use the comment feature in this blog to chime in with your favorite super hero film to date and why. I’ll randomly choose a winner this Thursday and announce it in this post.

WINNER– Thank you all for participating… great comments… great films. Dan Gordon was the randomly selected winner! Dan, look for an email– I just sent you one.

71 Replies to “Man of Steel Tickets”