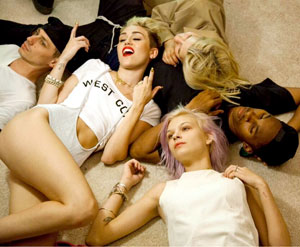 Miley’s new single just hit the charts last week, immediately souring to #1 on iTunes. The song is titled We Can’t Stop, and if you wanna know what she can’t stop… just Google the lyrics.

Not much more to tell.

My Twitter followers already heard from me when the song first went #1, and in all honesty, I hope the hype is over on this one. It’s slowly been sinking lower and lower in the top 10 each day. But as much as I hope the song disappears, iTunes already tweeted that the song is an early candidate for Summer Anthem 2013, and Miley has been tweeting about the upcoming music video. We know a music video alone can catalyst a song to greater popularity (i.e. Gagnum Style, Katy Perry’s Last Friday Night…)

We Can’t Stop is another example of a song that will be played everywhere because it is “clean” (in other words -no curse words). So all the parents who set music guidelines of “only download clean songs” … have no fear, your kids will download this and won’t hear curse words. They’ll just hear the above lyrics about red solo cups, doing what you want, saying what you want, “getting some”… all “clean” stuff, of course (can you hear my sarcasm dripping from this paragraph).

The answer to this kind of music isn’t overreaction, but interaction. And perhaps it’s time to reevaluate our guidelines.

The song’s #1 spot on iTunes was timely, because I’m going to be talking to youth workers within the week at the 2013 Student Leadership Conference, teaching my brand new workshop, “What iTunes Reveals about Today’s Teenagers” (something I’ve written about before- note point #2 in this past post, and then look at the lyrics to Miley’s new song). Then I’ll be talking with teenagers about the entertainment media we’re soaking in and how much it really affects us.

What about you? Click on the free preview of the song on iTunes and give it a gander. What do you think of the song?

One Reply to “We Can’t Stop”