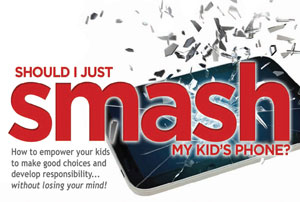 This week I’m teaching a brand new parenting workshop in an exciting new venue… we’re inviting parents and teenagers under one roof and opening up the doorways of dialogue.

The workshop is titled, “Should I Just SMASH my Kids Phone?” and it’s based off of the new workbook Doug Fields and I just wrote by the same title. The seminar equips parents to build lasting values and set boundaries that really work, teaching discernment along the way (I teach the workshop with parents and teens Tuesday night in the Sacramento area, and then again this week just to parents at the FAM Conference at Azusa Pacific University).

Yesterday I spoke in four services at the church hosting the workshop this Tuesday (a local church in Sacramento) introducing some of the issues we’ll unpack. I always manuscript my talks before speaking, so I thought I’d share the opening few minutes of my Sunday talk with you:

As For Me and My House…
It’s been exactly one year since I spoke here, and I especially find it fascinating how fast the world changes in so short of a time. Since last year at this time I can’t help but notice one enormous seismic shift in the world of youth culture and technology. This shift changes the way teenagers communicate and changes the way we parent. You see, last year at this time only a minority of teenagers in America owned these little devices right here: the smart phone. Sure, most of them had a cell phone in their pocket, which gave them the ability to make phone calls (which they rarely did), and the capacity to text (which they did nonstop). But that was the old “phone.”

As parents purchased new smartphones, passing their old ones down to their teenagers… and as Christmas passed, with Smartphones near the top of young people’s list… smartphone ownership has grown at a rate of about 30% in the last 12 months, and by most people’s count, now about two-thirds of 12-17-year-olds have one of these little devices in their pocket. The average American spends 2 hours and 38 minutes on this device. Teenagers, as you can imagine, are at the top of this curve.

What does that mean?

Well, now, the majority of teenagers don’t only have a phone and a device for texting, but they now have access to the internet and can freely browse the web. They can also download apps, watch YouTube, use social media, like Facebook, Instagram, Snapchat… name it. They now have access to iTunes, the hub of entertainment media. This means they now carry their entire music library, with access to the top songs at any moment, the top videos, the top movies and TV shows… have you ever taken a peek at what’s the top of the list?

And this is all in this one little Swiss Army Knife of Technology that fits neatly into their pocket.

This is raising all kinds of issues for parents.

I’ll give you one glaring example. A few years ago the journal Pediatrics released a sobering report about sexual content in media, and they recommended parents not only limit screen time, but that they remove all screens from their kids’ bedrooms. It’s not that screens are all bad, but in the isolation of a bedroom and late at night, screens were just offering too many distractions. No TV, no computer… no screens. Well… now two-thirds of teenagers have one of these in their pocket—this is a screen. And I don’t know many parents that stand outside their kids’ door at night with a bucket saying, “Ah, ah aaaaah… phone please. No screens in the bedroom!”

The truth of the matter is, most parents haven’t even addressed these issues with their kids. As a matter of fact, only 50% of parents have even enabled parental controls, and only 46% of parents have even discussed social media profiles with their kids. The fact is, in the busyness of life, their kids were begging for a phone, parents finally gave in, sick of their whining, the 14-year-old was handed this little device at Christmas with the instructions, “You break it, you pay for it.” And that’s it!!!

And now parents across the country are doing triage because their kids are taking a device that is capable of so much good and they’re making poor choices, mostly, because they’ve never been taught to make good choices with the phone.

The phone is like a car. It can be used for good, or for bad. But the crazy thing is, when we enable our kids to drive, we spend 6 months sitting next to them in a car, giving them instructions, teaching them skills, testing them, giving them limited control and slowly segueing to greater control. But a phone, this incredible powerful little device… we give it to them and say, “Don’t break it!”

No wonder so many parents are having trouble after the fact…

MORE ON THIS SUBJECT IN THIS WEEK’S YOUTH CULTURE WINDOW ARTICLE, “I MET HIM ON INSTAGRAM” 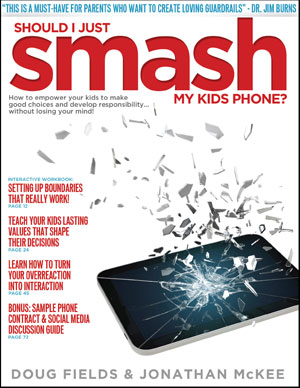 “Fields and McKee have
created a path that
empowers parents to
provide what their
kids need.”
-Dr. John Townsend,
Author of best-seller, Boundaries

3 Replies to “Should I Just Smash My Kid’s Phone?”