I always hate to answer that question, because it never ceases to make people angry. Maybe that’s because some people don’t like the answer: Rap/hip-hop.

I remember teaching at the National Youth Workers Convention in 2005 and 2006. In one of my seminars about outreach events, I challenged youth workers about their recurring choice of rock bands at all their venues. “How come every time I go to a big Christian event, the band playing is rock or even metal?” I asked. “Do you really think we’re accurately targeting our audience when we bring in a grunge band to try to attract neighborhood kids? Is this really what they are listening to?”

I backed up my inquest with the most recent data at the time, the 2005 Generation M Media report from the Kaiser foundation about media in the lives of 8-18-year olds (which comes out every 5 years- see our summary of the 2010 report here). The researchers did something pretty cool that year, posting a chart revealing what music genres 7th-12th graders in America listen to each day: 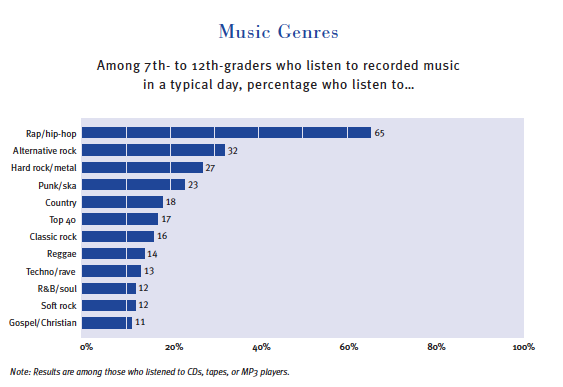 (Isn’t it funny how technology changes… note the results from “those who listened to CD’s, tapes, or MP3 players.” Tapes? Hilarious. I remember those days.)

So has that changed in 8 years? Has the Hip-Hop influence vanished along with the tape player?

Take a look at iTunes today, as I write this. If you look at the song charts… how much of Hip-Hop/raps’ influence do you see in the top 10 alone? If you were to go by the official definition, only 2 of the top 10 are actually labeled Rap by iTunes (Thrift Shop and Started from the Bottom), but with closer examination, I think you’ll find Hip-Hop permeating throughout the top 10.

Let’s take a closer look at the list…song by song.

So we have two songs labeled Rap (Thrift Shop and Started from the Bottom), three songs that I’d add to that list for the reasons stated above (Suit & Tie, Feel This Moment, and Scream & Shout), two Pop songs by people who have a clear R&B sound (When I Was Your Man and Stay), one Dance song with total Hip-Hop influence (Harlem Shake), one truly Pop song from a girl with a R&B start (Just Give Me a Reason), and one all out Pop song (Heart Attack).

What common denominator do you see on the top of this chart?

Hmmmm. And where are the rock songs?