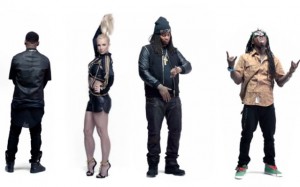 The music industry is at it again, pimping easily accessible smut for our kids’ eyes and ears. This time, it’s a new music video from Will I Am… and most parents don’t have a clue.

That’s what scares me the most– how unaware parents are. After the Super Bowl this year, I kept encountering articles written by parents who were “shocked” by Beyonce’s performance.

Don’t get me wrong. She was overtly sexual, she was inappropriate, and I think it’s sad that our country happily endorses that entertainment. But her performance was in no way “shocking.” If you’ve ever seen a Beyonce music video, that performance was simply par for the course. The only thing shocking about the situation was that millions of parents have been already letting their kids watch Beyonce perform for years without ever bothering to sit down with their kids, heeding the advice of the AAP, and co-watching this kind of media with their kids.

Perhaps parents should take a peek at some of the other content that is just a click away… like Will I Am, from the Black Eyed Peas (not the first time they have been on my radar).

I always like to keep an eye on the iTunes charts to see what young people are watching, listening too and downloading. Last weekend as I was preparing for my parenting workshop in NC on Sunday, I began to notice a new music video quickly climbing the charts. This music video climbed over 10 spots in 1 day, making it way into the top 5 of iTunes Music Video charts.

I’m talking about the remix of Will I Am’s song Scream & Shout with Britney Spears.

The original Scream & Shout song and video have been on the charts for months. I actually played that video for parents in one of my workshops last fall. The music video begins with Britney telling us to “turn that sh*t up” over and over again. Then she declares, “all eyes on us,” again and again.

Take a peek at the first 75 seconds of the music video embedded below to get a taste of what’s been at the top of the charts for literally months now. (This is the old version- We’ll get to the new version in a minute)

What’s even more discouraging is the new direction that Will I Am has decided to take this song and video with the new remix. Because he invited Diddy, Lil Wayne and a few others to join him on the remix of the song, moving it to a whole new level. If you want to see just a sample of what the remix brings to the table, just watch 20 seconds of this music video embedded below from about 2:10 to 2:30 when Diddy and Waka chime in…

So what are young people supposed to glean from this? Drinking, smoking, partying… are these guys really role models? Believe it or not, this music video gets even worse. If you watch from 3:30 on you’ll see what Lil Wayne brings to the mix.

Why do I show parents snippets of these videos?

Because some parents are absolutely clueless about the world that our kids are navigating through.

You might not like what you see. Paul didn’t. But he used it to understand the culture he was trying to reach, and to open up paths of dialogue with that culture.

Are you ready for conversations about today’s music?

IF YOU LIKED THIS ARTICLE FROM JONATHAN
YOU MAY ENJOY THESE: