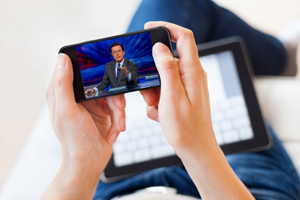 Which screens are teenagers clocking the most time in front of?

The answer has always overwhelmingly been the traditional TV. But, as a guy who spends a few hours a day researching youth culture, I’m not sure that it’s going to stay that way.

Each year new studies emerge revealing the growing popularity of other screens like the laptop, the smartphone and the tablet. This new Harris Interactive study, for example, shows 30% of young people age 18-34 favoring TV as their primary source of news and entertainment, with a very close 28% favoring the laptop computer.

The race is getting closer.

But let’s be clear, these studies vary depending on how you ask the question. For example, in the end of 2011 I blogged about a study where teenagers were asked, “What would you rather give up, T.V. or internet?” A slight majority said they’d give up TV. But if you look at the most recent Nielsen reports, you’ll find that young people (even as young as 12-17) are clocking more butt time in front of a TV than in front of a computer.

So which is it? And is perception different than actual time spent?

As a parent of three teenagers with iPhones, I can’t help but observe a huge increase in mobile app time. In my house, my kids’ daily smart phone time probably exceeds their daily TV time. But my kids don’t watch much TV, and I don’t want to assume that my home is an accurate representation of America.

It’s funny to look at all the different numbers various studies come up with. Sometimes it’s difficult to know who to believe. I’ve learned to look for common trends in reports. For example, most reports agree that smart phone ownership is growing, which is boosting the amount of time that kids are using social media. But most reports also agree about the draw of the TV. What differs is exactly how many hours young people are spending on each medium.

It’s important to notice these differences among age groups. For example, if you look at most studies about 18-25-year olds, they don’t seem to watch as much traditional TV as other age groups. Maybe this is because a huge chunk of them are in a college dorm without cable or Satellite. My 19-year-old son lives in a dorm at Azusa Pacific University. When he watches TV, he’s usually streaming Hulu or Netflix on his laptop. Compare that to his grandpa who watches almost all television via DVR on his TV.

The one source that no ones seems to doubt is the Kaiser studies. In 2010 Kaiser released their most recent “entertainment media” study, a study released every 5 years and cited by almost every periodical, newspaper and medical journal. This report revealed that the average 8-18-year old in America watches over 4 hours of TV a day, listens to over 2 hours of music and spends over an hour online.

The only problem? The report only comes out every 5 years!!!

One thing for sure… and I’m sure no one would argue. Young people sure spend a lot of time in front of screens!

What about you?
What do you observe out of your kids?

Does TV consume more time from your teenagers than other screens?

4 Replies to “Teenagers and Their Screens”