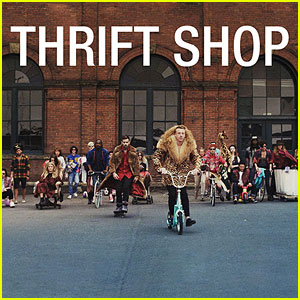 If you hang out with teenagers, you’ve probably heard mention of the song or music video Thrift Shop by two guys whose names no one knew a month ago, Macklemore & Ryan Lewis. The song (the explicit version) bounced in and out of the No 1 spot on iTunes last Wednesday, and the music video has been doing the same. It has been rapidly climbing the Billboard Hot 100 charts as well (always a little slower than iTunes), hitting No 2 this past weekend.

I first heard about it from Alyssa, my 17-year-old when she declared, “Dad, you’ve seen the video for that hilarious song Thrift Shop, haven’t you? Everyone’s talking about it at school.”

That, of course, peeked my curiosity.

Here’s the music video- unedited. It’s a little slow at the beginning, but kids are sticking with it, finding it both funny and catchy. Language Warning: even though the visuals are clean, this guy drops the f-bomb quite a few times in this video, with a few other vile phrases.

I think we’re seeing how much this younger generation is drawn to humor, naughty or nice. I’m reminded of LMFAO’s Sexy and I Know It, Katy Perry’s Last Friday Night, and the numerous Andy Sandberg/Lonely Island videos that went viral. Funny sells.

I’m not defending this music video’s vulgarity, but Thrift Shop is actually pretty tame compared to the other hip hop music videos in the top of the charts right now, like A$AP Rocky’s F**kin’ Problems and Pitbull’s Don’t Stop the Party, both hanging in the iTunes top 10 for the last two months, both extremely racy, the latter as close to pornographic as a video can be without actually being officially pornographic. Thrift Shop doesn’t go there at all with the visuals, sticking to humor for its draw.

Vulgarity aside, Thrift Shop’s theme is actually a positive one. (NOTE: I’m not saying that you should go buy this song or start listening to it. I’m simply pointing out some conversation points if you get into a discussion with kids about the song). It pokes fun at the concept of buying fancy clothes to gain popularity, and basically encourages bargain shopping. It celebrates it, in fact. Some would probably argue Macklemore & Lewis’ message about self esteem is refreshing.

I don’t know how far I’d go with that, but I have to admit… these lyrics are rather amusing:

WHAT ABOUT YOU?
What do you notice from the video?

What are your kids saying about the video?

IF YOU ENJOYED THIS ARTICLE FROM JONATHAN,
YOU MAY ALSO ENJOY…