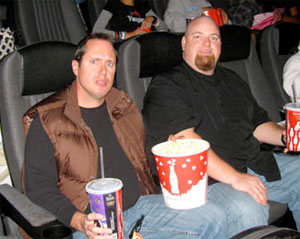 Each January I like to sit down with my movie reviewing buddy Todd Pearage and reflect back on our favorite films of the past year. This year was a fun year for films, especially superhero films. (The Avengers, Dark Knight and The Amazing Spiderman all in one year! Pinch me!) But it was also a fun year for midnight premieres. My wife and kids attended two of these midnight premiers with me, both The Hobbit, and The Avengers.

But for me to compile a list of the best of 2012… I feel a little inept this year, not in ability, but simply because I have been so busy that I missed numerous good 2012 films in the theatre. Unfortunately, I’ve missed plenty that have ended up on others “best of 2012” lists. For example: I have NOT seen Zero Dark Thirty, Lincoln, Wreck-it Ralph, Django Unchained, Perks of Being a Wallflower, Argo, Les Mis, Skyfall, Life of Pi, The Bourne Legacy, Flight, or Promised Land. Those movies are all in my rental queue and some of them will probably eventually end up in my list of 2012 favorites.

Right now, my list of the best of 2012 would most likely include The Avengers, People Like Us, Hunger Games, The Hobbit, The Dark Knight Rises, and The Amazing Spiderman. I would also have to put some thought into considering Lawless, Premium Rush, or even Looper. Some of these films were a little raw, so I’m not sure.

But forget my incomplete list. Todd has reviewed a ton of movies this year and already compiled his list of his favorites… so without further a-do, here’s his list, with comments from both of us.

TODD’S WORD: I said it then and I will say it again. This was the best movie of the year. I really loved this one. It had it all: action, drama, comedy…and Iron Man!

JONATHAN’S WORD: Agree. I’ve watched this one a few times again with the kids. We always love it.

TODD’S WORD: No question The Dark Knight Rises was my second favorite superhero movie and my second favorite movie overall. Christopher Nolan and Christian Bale maintained high energy, excitement and top-notch quality through all three films this is one solid trilogy.

JONATHAN’S WORD: I loved it too. But the surprise for me was Thomas Hardy (playing Bane). This guy has a great career ahead of him. He has a range as huge as his biceps. (Loved him in Lawless)

TODD’S WORD: I don’t imagine there will be many lists that will not include Lincoln. Everything about this movie is done with excellence.

JONATHAN’S WORD: It looks good. I gotta see it.

TODD’S WORD: This spider man film was far and away better than the previous trilogy. Gone are the campy one-liners and all the silliness. I can’t wait for more of this version.

JONATHAN’S WORD: My entire family saw this one as well and loved it. I actually enjoyed the earlier trilogy, but agree that this one trumped all three.

TODD’S WORD: I’m not the biggest hobbit fan in the world. But Peter Jackson has done something special with the Lord of the Rings films and now with the Hobbit. This one will definitely find its way into my Blu-ray collection.

JONATHAN’S WORD: This looks amazing. I can’t wait to see it.

TODD’S WORD: Liam Nielsen being chased by wolves, what’s not to love? Despite leading Jonathan and Lori’s date night astray with this one, I loved it. In all seriousness, I love the story, the characters, the way they were developed and of course the intense action throughout this entire movie.

JONATHAN’S WORD: Despite the fact that Todd indeed sabotaged my date night with this one… it was a pretty good film if you don’t mind a dark, depressing ride into the abyss.

8. The Perks of Being a Wallflower

TODD’S WORD: This one may surprise some of you, but as a youth pastor this movie spoke to me. It was at times difficult to watch and I will admit…I cried.

JONATHAN’S WORD: Didn’t see it. Wasn’t going to either, but now I might, based on Todd’s word.

TODD’S WORD: This spot was occupied by The Hunger Games until I watched Jack Reacher. It is one of the best action movies I’ve seen in a long time and it was filmed in Pittsburgh.

JONATHAN’S WORD: It would have to be pretty good to beat Hunger Games, so I’ll be definitely seeing this based on Todd’s word.

TODD’S WORD: I don’t think John Carter is on anyone’s top 10 list of 2012. But I really like this movie. It’s clean, it’s fun and there is plenty of action.  I really believe it did not do well because so many people thought it copied all the other science-fiction films. But John Carter was written long before Star Wars or Star Trek. If you missed this one I would definitely recommend picking it up on DVD.

JONATHAN’S WORD: I thought this looked incredibly stupid, but have heard several people I respect tell me how good it was. So this is on my list to watch as well.

What about you? What were some of your favorite films of 2012?