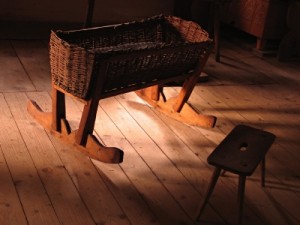 The following guest post is a special Christmas series from George Lockhart of the Youth Culture Report:

Babies spend much of their early days in a crib. It is their home, their resting place, their safe haven in the days when they are most vulnerable.

Who would have thought that we would come to love the term so much in the 21st century that we would call our homes our “crib.” In fact, MTV has even developed a show called “Cribs” which celebrates the luxurious lifestyles of the rich and famous. In this series of blogs, I’d like to look at how Jesus’ crib was not only different than ours but how it set the stage for everything else that would happen in the course of his life. Not only did his crib define his purpose, it would define his journey into the hearts of the people He came to save.

Jesus went from riches to rags!

When we think of the MTV version of Cribs, it’s easy to see how over-the-top some people live. Not that there’s anything wrong with big houses, bowling alleys, Olympic size swimming pools, etc. but isn’t it a little excessive? Isn’t it a little more than what is necessary? Sure in America we celebrate bigger being better. The American Dream is all about more of whatever it is you want. However, Jesus coming as a baby in a manger completely blows the mindset for those who would believe that your crib needs to be equipped with the biggest and best of everything.

The whole foundation of Christmas is founded upon the fact that Jesus was willing to go from riches to rags. This is not a feat of any other god! Instead of opting for the red carpet, paparazzi package, Jesus settles for a humble feeding trough in an obscure village called Bethlehem. He chose a crib that wasn’t fancy but rather messy! He came without much glitz or glamour. Instead His arrival, though announced by angels (How cool is that?!), went unnoticed by most of the rest of the world.

Yet, here we are today, some 2000 years later still talking about this babe in a manger, not because it was fancy or bigger or better than any other king of his day or time. No! We are celebrating Christmas because our savior was wrapped in swaddling cloths and laid in a manger! That was His crib! He came this way, born in a stable because our world was unstable…our lives a wreck! He came and chose a manger amidst all the putrid smells and filth of a stable to reveal His heart for all mankind.

All of our lives are messy, filthy, out-of-whack, and full of crap and yet Jesus is willing to come and live in us! He’s willing to make our hearts His crib! This is the essence of Christmas: that Jesus was born and had a humble crib to be born again in our humble hearts. Jesus went from riches to rags so that one day I could go from rags to riches! In Christ I am promised a “crib” in heaven unlike anyone on earth could build and it’s all because Jesus made a manger His crib!