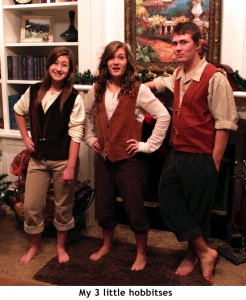 Last night my family attended The Hobbit midnight premiere, with my three kids in full Hobbit apparel. Loved the movie and the time with my family… hated the time of day! (I think I’m officially old)

A few months ago my girls asked me if they could go to The Hobbit midnight premiere. As a parent these questions are always difficult. I don’t want my kids out at midnight, and I’m not too happy about it being on a school night (Thursday night). But as a parent, I’ve learned to pick my battles, as well as seizing any moment where we have an opportunity to hang out together. So when they asked, I simply replied, “Sure, I’ll go with you… and you can’t miss school the next day.”

My kids’ first midnight movie premiere was Rise of the Planet of the Apes. Such a fun experience! Earlier this year, the kids and I talked Lori into going with us to The Avengers midnight premiere. Another amazing movie watching experience—many of you remember my blog post about the late night adventure. So, a chance at hanging with the whole family, watching the newest film from a series I love? No question.

We knew that the nerd community would really come out of the woodworks for this one, so we decided to grab a fast food dinner and get into line at 8PM. When we arrived at the theatre, the line had only 38 people in it, lined up outside on the sidewalk. We spread out some blankets and got as comfy as possible on the sidewalk. Alec provoked a few cheers with his bare hobbit feet and pointy ears, but soon we were all covered with blankets trying to deal with temperature in the low 30’s. (Remember, this is California, that’s like below 0 for the rest of the country!!!)

We quickly received word that we’d get let into the theatre about 9PM so we could endure the 3-hour wait indoors. 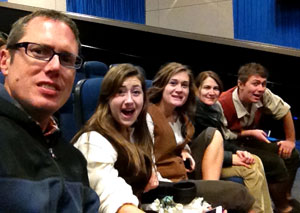 At 9PM sharp they opened the doors, and we grabbed 5 seats together in about the 5th row of the stadium seats. Great seats.

Ashley and I did a Wal Mart run and bought some magazines and a couple books (our plans to play games hadn’t worked out sitting in a row of theater chairs).

Time passed rather quickly, and soon the film started.

Our theatre never got to see an extended Star Trek preview, like my friend Mark Matlock and others tweeted about. I wasn’t too disappointed, I was just eager to get to The Hobbit.

All five of us really enjoyed the movie. I don’t have much to add to Alec’s official review of the film, already posted on our Movie Reviews & Quick Q’s page, other than the fact that all five of us felt like it was an amazing continuation of the LOTR trilogy and we will definitely be adding this film to our blu-ray collection.

After the film, we drove home, groaning like a herd of zombies and finally crawling into bed at about 5 minutes to 4AM.

My poor girls had to get up at 6AM to get ready for school (so glad Alyssa drives!!!!). That was part of the deal. No missing school the next day (no mercy from this dad).

Well… they are the ones that asked to go to this thing!!!

One Reply to “The Hobbit Premiere”