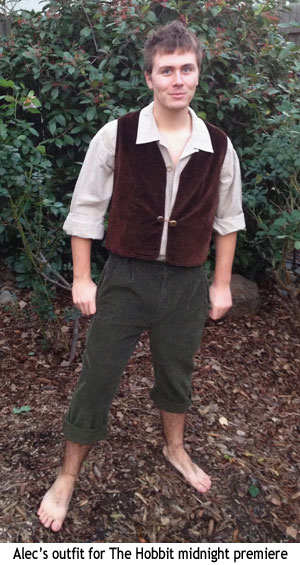 This Monday, while I was flying back from teaching a parenting workshop in Kentucky, my son Alec was attending a movie screening for The Hobbit. (Lucky dog!)

His reaction was surprising.

I arrived home at about 10PM and plopped on the couch next to Lori. A few minutes later, Alec got back from the screening.

“How was it?” Lori and I both asked, curious about the film we have been waiting in anticipation for since we first heard rumor of its release shortly after Return of the King.

Alec paced back and forth, rubbing his forehead. “I don’t know.”

Alec stopped and searched for words. “It was like nothing I’ve ever seen. I can’t even put it to words.”

Alec shared his entire screening experience with us, and after mulling it over for a couple days, he’s put his feelings into words for all of you. Here’s just a snippet of his review, now posted on our Movie Reviews & Quick Q’s page:

The Hobbit: An Unexpected Journey
by Alec McKee

This film was truly… unexpected.

I walked into this film expecting something like Lord of the Rings. Mistake #1. This movie is not really like Lord of the Rings much at all, and I can’t tell if its our responsibility as an audience to hold it to a different standard or to be justified in feeling like the change of tone is too drastic. The film was way more lighthearted than the previous LOTR, bringing a sometimes goofy feeling for the film that gave me the impression Peter Jackson was trying to reach out to younger audiences. This would make sense, since the book The Hobbit was intended by Tolkien as a children’s story. The characters are also a little bit more exaggerated and imaginative than we have previously seen in LOTR; the dwarves showcasing exotic styles in their hair and beards and the wizard Radagast literally having half of his face encased in what appears to be bird feces.

I was also caught off guard when, as I was walking into the theater, I was handed a pair of 3-D glasses. I wouldn’t have chosen to see this movie in 3-D had I been given the option, because I would’ve expected that 3-D would’ve been blurry and distracting to the quality of the film (you’ve probably heard my dad whine about 3D. He hates 3D. Maybe I inherited some of that). Mistake #2. The 3-D was dumbfounding in clarity and seamlessly integrated to the point that I forgot I was watching it in 3-D. There was no motion blur, no decrease in image clarity, and the glasses weren’t all scratchy on my nose like they usually are.

However, clear as the movie was, I couldn’t help feeling…odd as I looked on the screen. The movie was so smooth and high in definition, that the motion almost felt unnatural. This is probably because this film entered uncharted territory by shooting the entire picture at 48 frames per second, where 24 fps is the norm (30 for home video). This gave the film a much smoother, lifelike quality. I couldn’t decide if this was a bad thing that the film procured such feelings, or if it was just unfamiliar territory because of how foreign the motion was to what I typically have seen in film. As the movie continued on I soon forgot my apprehension of the screen’s clarity, but never disregarded it entirely.

1. Thanks to all of you for your contest entries from Monday’s blog post. So much fun hearing over 100 of you comment and share your favorite films… all except for that one guy who listed Xanadu.  🙂   I just posted the three winners to that contest on that post HERE.

2. Tonight (Thursday night at midnight) I’ll be Tweeting from the Hobbit midnight premier. Yes, now I finally get to see it, and in true geek fashion, with my family at midnight (a whole family of film nerds). Feel free to listen in to my Tweets starting at midnight Pacific time (or for those of you getting up at 6AM on the East Coast, you can probably see my last Tweet as I’m going to bed!!!)

One Reply to “An Unexpected Review of “The Hobbit””