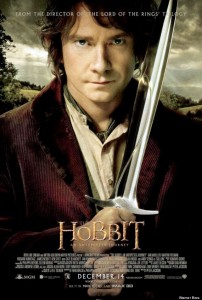 This week is a big week for film geeks… because this Friday (or Thursday night at midnight for real fans), The Hobbit comes to theaters!

This means fun for you, my blog readers, because I’ve got some great goodies for you, including free The Hobbit movie tickets for a couple of ya. Yes… it’s time for a little contest.

The Contest is Simple:

Look forward to three things from me later this week:

May the odds be forever in your favor (whoops… wrong film).

WINNERS: Congrats to three winners, each winning a pair of tickets to The Hobbit premier!!! Thank you all for your awesome comments! I loved it! Here are your winners:

172 Replies to “The Hobbit Tickets”