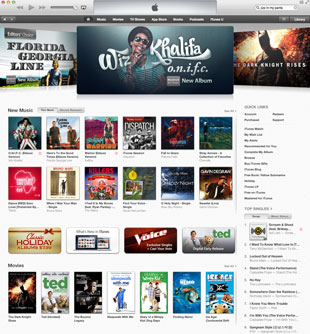 If you want a glimpse into the window of youth culture, just take a peek at the music they’re buying. Lucky for us, you have access to an ongoing meter revealing the top-selling songs at any given moment. I’m referring to iTunes, the online music, TV and movie store that comes on all these online devices at the top of our kids’ Christmas lists.

This weekend I’m traveling to Kentucky to teach my last parenting workshop of the year. At these workshops, I always provide a quick tour of today’s music, TV and other media. This “tour” always includes a peek into iTunes. So today I popped onto iTunes to familiarize myself with what people are listening to this week (With the YS National Youth Workers Convention and Thanksgiving, it’s actually been a month since I’ve taught a parent workshop). It’s amazing how much you can learn about current pop culture in just a glimpse.

5 Observations about Our Culture from Today’s iTunes

1. TV is Still Huge!
Yes, when you open iTunes, the focus is music. Note the top singles listed on the right hand side of iTunes main page. But on any fall Tuesday morning, a quick peek at those top singles will reveal the power of television. This Tuesday morning, 5 of the top 10 singles were performances from last night’s episode of NBC’s hit TV show, The Voice.

A quick peek at TV ratings will reveal The Voice already is one of the top 5 shows watched by America in any given week (it usually lands at No. 3, right under The Walking Dead and football, and always lands among the top 10 shows watched by 12-17 year-olds). But The Voice isn’t limited to a one-screen experience. Following the steps of American Idol, The Voice sells its performances on iTunes immediately after the show. Hence the blip on iTunes’ charts every Tuesday.

Today’s multi-tasking television viewers love jumping on their mobile devices and purchasing their favorite tunes right then and there!

But what else are they purchasing?

2. “Just Lose Control”
If I were to make up lyrics that represented the most common content in today’s popular music, off the cuff, I would probably rattle something off like…

Get on the dance floor
And let your body rock
Girl I love the way you move
Drink it up! Don’t stop

So drop it down low
And back it up real nice…

That looks like a good place to stop. (Wow… it’s scary how easy that stuff rolled out. I’ve been studying this stuff waaaaaaaaay too long!) Yes, I just made those lyrics up, but really, those lyrics are just a snapshot of the content that goes No. 1 on the charts: I like your body, drink, this feels so right, just lose control, drop it low… Check it out for yourself; look at the lyrics of the will.i.am and Britney Spears song, Scream & Shout, No. 1 on iTunes right now, as I write this.

Sure, some music today is straight up raunchy. But I’d say that most of the songs that really last on the charts are the club hits that basically are singing, “Live for the moment, it feels so right, lose control, girl I wanna be with you because you look so good…” To young people, these lyrics are harmless, but they objectify women as sexualized objects. In addition, these songs clearly reveal the focus on the temporary thrill… the quick fix, with lyrics like “lose control” and “drink it up.”

3. Eye Candy Sells
If you pop on iTunes right now and click on Music Videos, you’ll see a music video from Pitbull for his song Don’t Stop the Party. If you click to watch the 30-second preview for that video,

you’ll see a huge party, along with shots of naked (with just enough covered to keep it “clean”) and scantily clad girls lying on a bed like they’re in Pitbull’s “harem.” If you wonder about this song’s popularity, Bud Light is featuring the song with excerpts of the video for a new Bud Light commercial during the football games (which are the number one viewed television broadcasts watched by families right now).

Do all kids view these videos on iTunes? Nope, many go to YouTube, where they can watch the entire video for free. Nielson recently reported that more kids listen to music through YouTube than through any other source. So jump on YouTube and search for “Pitbull Don’t Stop the Party Official Music Video” and see what pops up. The thumbnail picture alone will make parents’ jaws drop. If you click on it and watch the first 30 seconds of this “clean” video, you’ll need to take a cold shower.

Just ask yourself, “Do you think a junior high boy is going to click that?” After all, it doesn’t even say “explicit”… which brings me to my next observation…

4. iTunes is Teaching Kids a New Kind of “Clean”
The will.i.am and Britney song has an explicit warning, because it repeats two curse words. But Pitbull’s pornographic music video has no warnings anywhere.

Trust me, there is no logic to it. LMFAO wiggled their junk in front of our kids all last year without any “explicit” warning” whatsoever. Meanwhile, a song with the word “sh*t” in it will be declared “explicit.” Where this gets amusing (or sad) is when parents use the “explicit” warning as a gauge as to whether a song or music video is acceptable or not. In other words:

Bottom Line: parents shouldn’t allow the world to set the standards for what is appropriate for our kids. Research is clear that “the lyrics do affect us.” Parents need to set guardrails based on their own values.

5. Humor Lasts
Yes, sex sells. And yes, those club hits really are popular. But nothing seems to sell like a good dance song with a little bit of humor.

Take the hit song and music video Gangnam Style, for example. This music video has been at the top of the iTunes charts since August! I constantly ask teenagers why they like it. Their first response is always the exact same. They laugh and say, “It’s hilarious!” Then they say something about it being a great dance song or wanting to learn to dance like Psy (I do love his dance moves).

The latest music video I saw last this long at the top of the charts was LMFAO’s hit Sexy and I Know It. This video was truly a spoof. Like Psy, LMFAO mastered the art of humor mixed with good music.

Think back and you’ll discover a pluthera of examples of humorous music videos that lasted at the top of the charts. Sadly, many of them are on the raunchy side (Andy Sandburg’s J**z in my Pants)

How Should Parents Respond?
People always corner me after my workshops and asked me, “What do I do with my 16-year-old? He listens to all that junk on his iPod!” The short answer is: frequent conversations. Whenever people grab my recent parenting book, often the first chapter they open is chapter 6: Dad, can I download that song? …probably because this chapter helps parents talk with their kids about entertainment media, and set reasonable guidelines.

Do you know what your kids are browsing right now?

For more about the music teenagers are listening to today, David and I will once again be reviewing all of 2012’s Billboard No. 1 songs of the year in our Youth Culture Window articles near the end of December.

6 Replies to “What iTunes Reveals about Teenagers”