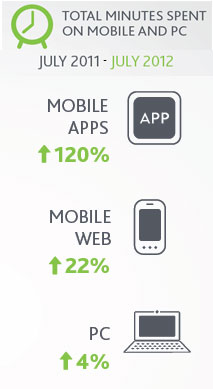 Nielsen Research released their brand new Social Media Report today with the latest data about exactly how much time people are spending on social networking sites like Facebook, Twitter… and which sites they prefer.

Yes, Facebook still reigns as the most popular social network site, with Twitter gaining popularity, and Pinterest exploding in growth (a year-over-year increase of 1,047%, compared to Facebooks 4% decrease).

The rise of mobile activity has increased the amount of time that people spend on the internet. Mobile web browsing rose 22% from July 2011 to July 2012. Mobile App time rose 120% during that same period.

So what are some of the ramifications of social media permeation?

What about you? What ramifications do you predict from this social media explosion?

One Reply to “Me Want Social Media”