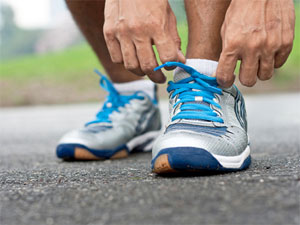 Those of you who are my Twitter followers have read an occasional tweet about my training for a marathon. The marathon was this Sunday, December 2nd… a sad day for me.

The disappointment didn’t hit Sunday, it hit me like a knife 45 days ago.

Training was going great until that day. I was running one of my long days, with a goal of 17 miles that day, and the trail I was on would have dumped me about a mile and a half from my car, so I thought, “I’ll just run 18 today.”

It wasn’t a bad plan. I had run 16 the week prior and I felt great. This whole training has been different for me because I’m lighter and faster than before. I recently ran/biked/kayaked a short tri where my ran averaged 7:30 pace, and then I ran a half marathon where I hit about 8-minute pace (we always talk in terms of our mile-time as a pace). I’ve done two marathons, and I know that the second half of the marathon is slower than the first, but my trainer and all my workouts were affirming that I could probably do about a 3 hour 45 min marathon this time (8:30 pace). Frankly, I would have just been happy to beat 4 hours (which is about 9:07 pace).

But then it happened.

On this particular October day, 45 days ago, I was taking it easy, averaging about 8:48 pace, and feeling great. I really felt like I could have run all 26.2 miles that day. But then at 16 miles my right calf started tightening up. By 17 it was so tight it was painful (this was new- I’ve never experienced this muscle giving me trouble. Perhaps it was the sprints I had run earlier in the week). Part of me thought, “Stop, Jonathan. You were only gonna run 17 anyway.” But then another voice said, “Jonathan, you need to learn to run through pain. Keep going!”

At 17.3 miles my right calf fails. I literally felt like it collapsed. I buckled and could barely walk.

I hobbled along the trail for about half a mile and tried to run again. Nope. It felt like my muscle wasn’t even there anymore.

Long story short, a week later I’m in my PT’s office and the news was a mixed bag of nuts. I didn’t pull or tear anything, but in his words, “You can forget your goal of trying to keep training for speed.”

But my PT said, “If those go well, you can try to start segueing into running longer runs again, but just don’t try speed runs in between.

I could taste it. I had it all planned out. I would try to run 18 miles successfully, and then just two more big runs the following weeks, then slowly start my taper for the big day (you don’t do any more big runs starting 21-days out, only small runs and stretching, resting up for the big race).

October 31st at 8PM I start feeling flu-like symptoms. Thursday, November 1st I wake up coughing and with no voice. I mentally postpone my run to the next day. But a voice of wisdom (known to many as my wife, Lori) says, “Jonathan, you are sick and you’re flying to Nebraska on Saturday to speak for the weekend. If you run Friday, you’re gonna kill your chances of speaking this weekend, and they booked you six months ago.”

I didn’t want to listen. So I said a typical male response. “So what are you saying?”

Lori sighed. “I’m saying that this marathon is probably over for you.” The words hung there like a dense fog.

Lori has run a marathon with me before. She knew that I already had missed over two weeks because of this injury. This was my last shot to get back on schedule before my taper for the big run December 2nd. No matter how we tried to calculate salvaging this training… it wasn’t gonna happen.

Lori’s words proved right. My sickness grew worse. I limped through the Nebraska weekend, and ended up getting a special cough syrup from my doctor a week later, and the following weekend I was sick again.

This bug kept me away from running for three weeks (I’ve never had something hang on this long before. It’s been crazy.)

So after over a month of nothing, last week I ran 5 miles for the first time. Two days later, another 5. Two days later, 4, the whole time, knowing that there was no way I could run even a half marathon on Sunday.

This California International marathon, like most races, doesn’t offer refunds. Funny enough, this Sacramento-based marathon runs within a mile of my house at about the 5-mile mark. I figured, “I paid over $100 for this thing. I’m gonna run some of it.”

So Sunday morning I met my friend at the start line and told him… “I’m gonna run a little bit of this thing.”

“How far?” He asked. He knew my injury story.

I ran 7 and peeled off to my house. It was the first time I’ve ever missed hitting a personal goal.

It was a sad running day.

My high school English teacher would probably advise me to stop writing at that last sentence- I nice literary bookend. But I’ve gonna tell you… I don’t let stuff like this bring me down. The family and I hit Buffalo Wild Wings that afternoon, laughing, hanging out and watching the Bronco’s game in all our Bronco’s apparel… which looks a little funny in Sacramento.

Life goes on. (But I’m going to beat that tri-time this coming year!!!)