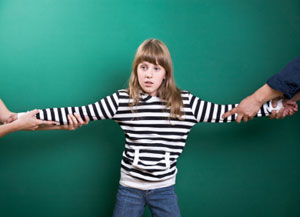 I have a good friend who got married recently, and one of her wedding gifts was… two teenagers.

That’s right, she married a divorced man who has partial custody of two teenagers. My friend drove out to one of my parenting workshops and told me, “I better learn this stuff quick, because I skipped diapers and Sesame Street, landing right in the middle of MTV!”

It was this friend of mine who prompted me to provide some resources for parents who were raising their kids in divorced homes.

As helpful as that article was, I asked Lane to write another article in the series, because I keep hearing the same question over and over from divorced parents:

“What do I do when my spouse doesn’t believe in God, the Bible or any of our values? He/she keeps unteaching everything I teach!”

That is a great question, and sadly… a common one. So I asked Lane if he could address this in a second article on our PARENTING HELP page on TheSource4Parents.com providing some realistic advice for parents caught in this tough situation.

Lane sent me this article a few days ago… and it is powerful! I just posted it. It’s titled, Hope in a Hopeless Situation: Raising Kids When Divorce Gets Ugly.

I have a friend- we’ll call him Dan- whose world was train wrecked 10 years ago when his wife of 5 years informed him that she was a lesbian and wanted out immediately. As if that wasn’t a big enough kick in the gut, they had a one year old daughter facing a future that Dan had never even contemplated.

Now a decade later, Dan’s daughter is 11 and entering middle school next year. His ex-spouse has basically done all in her power to undermine, compromise, and effectively dismantle the efforts of Dan to raise her in the ‘nurture and admonition’ of the Lord.

Dan’s daughter has made a commitment to Jesus Christ and is dedicated to remaining a fully devoted follower as she heads for the adolescent wrecking machine known as junior high.

Dan and I chat fairly often because of my marital background. I’m divorced as well, and thought my ex-spouse wasn’t openly averse to me taking my two kids to church and raising them in a godly home, the worldview being propagated in her home posed challenges of consistency in terms of what exactly is the truth about Christianity and what it looks like to follow Jesus. And similarly, my children- although older (and only slightly scarred survivors of middle school) are committed Christ followers as well.

So I sat down with Dan last week to get some practical wisdom for those dealing with the challenge of dealing with an ex-spouse who doesn’t consider belief in God, church and the Bible to be important. If you are in this situation, our prayer is that you find these helpful approaches that bring you hope in the midst of what feels like a hopeless situation.

#1- Communicate with Gentleness and Respect
Gentleness and respect are sometimes the last two traits on the menu for many of us when we communicate with our exes. But you need to remember, if you are co-parenting with an ex, you are in a lifelong journey with a myriad of critical communication pieces. While it is frustrating or even infuriating that your child’s mom or dad doesn’t support your convictions about raising your child in a godly home, it is imperative that you “be at peace as far as it depends on you” (Romans 12:18). I realize that nearly every conversation is pre-loaded with potential emotional explosions, which is why the ones about the spiritual development of your child are especially important to keep gentle and respectful.

Dan would consistently strive to communicate civilly and rationally with his ex with an attitude of Christlikeness, and over time his soft answers were able to turn away wrath. So rather than take a defensive position when discussing church or the Bible, instead communicate understanding and gentleness. This becomes easier when you…