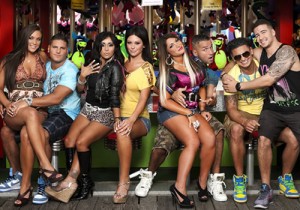 Parents are always shocked to find out that Jersey Shore is the number one show watched by teenagers. The question is… will it remain #1 for its final season?

The answer to that question might be good news… but a sad commentary about our society.

The situation (no pun intended) is intriguing. Season 6, which started last Thursday, might be taking a precarious leap. The show might just possibly be revealing actual consequences of behaviors this season.

For its first five seasons, “Shore” was about blithe, carefree twentysomethings partying and hooking up.

This season we see the consequences of that behavior, and it’s an eye-opener. It ranges from the joyful, with Nicole “Snooki” Polizzi readying to give birth to her first child, to the sobering, with Mike “The Situation” Sorrentino entering his first “Shore” season after going to rehab for alcohol and drug addiction.

Anyone who has seen 5 minutes of any random episode in the past 5 seasons can attest to its blatant irresponsibility. Watchdog groups have even gone as far as to log and count each sexual reference used on the show, noting that only 4% of the sexual references on Jersey Shore and three other MTV reality shows were actually responsible.

So what will audiences do if Snookie and The Situation become… mature?

Sadly, the first episode might be an indicator of how America will react. The show launched with its lowest ratings since Season 1. Let me clarify: low ratings for this show means “only” 4.69 million viewers. This was still the second most watched show on cable Thursday night, competing with many of the broadcast shows of the evening. I have yet to see the 12-17-year-old age group totals for the week (UPDATE: Sure enough, it was the #1 show watched by 12-17-year-olds that night)… but I’m sure Jersey Shore will be in the top 10. (I’ll be Tweeting about it when it’s posted)

Has Jersey Shore shot itself in the foot and killed itself before it’s gone?

Could it be that young people might actually discern something from this show now?

Regardless where you land on those questions, there is one un-debatable fact. Young people are still watching the show, and adults can use it as a springboard for conversations. Don’t get me wrong—I don’t think parents should encourage their kids to watch the show. But if adults encounter young people who already are watching the show, I think adults should choose interaction rather than overreaction. If you find that your kids are watching the show, use the opportunity to ask some questions and get them talking about real life issues. Ask:

Only time will reveal the fate of Jersey Shore. The season premiere definitely gave America a glimpse of something different from the cast… a desire for growth.

Will American opt in? Entertainment Weekly’s Darren Franich offers some intriguing insight, said so well, I dare not paraphrase:

There are moments in the season premiere that are really just about people trying desperately to grow up. In that context, MTV’s decision to cancel Jersey Shore makes a sad amount of sense: It’s like the network is outright admitting that the cast was only interesting when they were destroying themselves. Sadly, that’s probably also true for the vast majority of Jersey Shore viewers. But that’s just another reason why this final season of Jersey Shore is weirdly thrilling: In a culture that has become addicted to train-wrecks, Jersey Shore has become a show about survivors trying to put themselves back together.

Funny… I hate to admit it… but I’m now actually slightly intrigued about this season.